Jadeja, Ashwin demolish Australia to an innings and 135 runs defeat

Australia collapsed to an innings and 135 runs defeat in the Second Test at Hyderabad. Ravindra Jadeja and R Ashwin wreaked havoc in the Australian camp...

Australia collapsed to an innings and 135 runs defeat in the Second Test at Hyderabad. Ravindra Jadeja and R Ashwin wreaked havoc in the Australian camp to complete a demolition job in the first session itself. The tourists resuming Day 4 at 74 for 2 in 32 overs were bundled out for just 131 in 67 overs! Ashwin took five wickets and Jadeja who might have taken only three wickets but was more destructive than the off spinner.

The first wicket of the morning fell in the third over itself when Shane Watson (9) tickled a short of length delivery off his pads from Ishant Sharma to the diving MS Dhoni. Next to go was Skipper Michael Clarke who got a magic delivery from Jadeja (16) which pitched around middle and spun away past the frontfoot defence just enough to strike the off stump. Opener Ed Cowan who did all the hard work perished next when he edged a square cut off a sharp turning and bouncing delivery from Jadeja to the slips. Cowan had dug in for 150 balls to score 44. 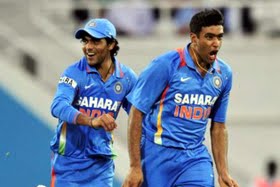 Defeat was inevitable for the Aussies as they slipped to 111 for 5. India got a bonus wicket to make it 111 for 6 as Moises Henriques was run out for a duck by a direct throw from Jadeja after he was wrongly called for a non-existent single from covers by Matthew Wade. Debutant Glenn Maxwell attempted a poor flick shot across the line to get out lbw to a carrom ball from Ashwin and it was clear that the Aussies would head towards an innings defeat at 123 for 7.

India went onto take the next two wickets in consecutive deliveries with Jadeja forcing Siddle to edge a turning ball off the backfoot to slip and then Ashwin having Matthew Wade (10) jabbing at a jumping off break to slip. After a wait of around 8 overs, the last wicket fell when James Pattinson was given out lbw to an Ashwin delivery which pitched on leg and straightened.

The tourists lost eight wickets for 57 runs in 35 overs in one session to crash to a morale shattering defeat. MS Dhoni with this became the most successful Indian Captain with 22 Test wins under his belt. The Man of the Match award went to Cheteshwar Pujara for his commanding double century.

Build Up to Day 4: India will be eager to wrap up the 2nd Test today at Hyderabad while Australia will be hoping to get one big partnership that can turn things around. A tough day for the Aussies with 192 more to score to make India bat again and they have eight wickets in hand on a pitch that is taking square turn, keeping low, the odd ball jumping and doing all sorts of tricks.

Cheteshwar Pujara is the Man of the Match for his 204. Says that there was pressure on him as he had just got married and his wife was worried whether he would perform. Pujara says having scored a big hundred against the Kiwis here, the pitch is very familiar to him and that it was important to see off the new ball and take it from there. Says that he had good communication going with Vijay in that massive partnership which took the match away from the Aussies.

MS Dhoni who has become the most successful Indian Captain with 22 Tests wins looks satisfied. He says that Bhuvneshwar gave his team a superb start to the Test match. Says that the pacers aren't expected to take many wickets but Bhuvneshwar did so by bowling good lines and then the spinners took over. Vijay and Pujara according to him tired the Australian bowlers with their massive partnership. Dhoni reveals that the plan was to bat for 30 more mins yesterday and declare but India lost wickets in a hurry to get bowled. Dhoni gives full credit to all his team members and mentions that Harbhajan had to wait long before he could get the ball as Jadeja and Ashwin were doing all the damage themselves.

A tremendous victory from India in this morning session! And here is Michael Clarke talking about the match to Ravi Shastri. Says that his team has been outplayed completely and their batting faltered in the best of conditions. Clarke is certainly not happy with his batsmen and says that there is plenty of hard work to be done to come up with a stronger performance in the third Test.