Team India needed just 12 deliveries on Day 4 at Ranchi to complete the whitewash of South Africa. Debutant Shahbaz Nadeem did the honors by claiming

Team India needed just 12 deliveries on Day 4 at Ranchi to complete the whitewash of South Africa. Debutant Shahbaz Nadeem did the honors by claiming the last two wickets to fall and end the Proteas’ misery in India. The game saw Rohit Sharma notching up his maiden double hundred, before pacers Mohammed Shami and Umesh Yadav ran through the South African lineup, cleaning them up for 162 and 133 in the two innings.

As expected, Sharma was named both man of the match for his Ranchi knock, and man of the series. The opener finished the series as the highest run-getter with two hundred and a double hundred. Speaking at the post-match presentation, Sharma stated that he wants to make every chance count. 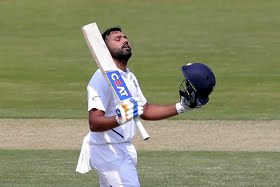 "It's been a great start, so I don't want to let it go. That started long back in 2013 when I started opening for India in white-ball cricket. I realized you need to have discipline at the start of the innings. Once you are in, you can play your game,” the in-form opener explained.

On tasting success in Test cricket after a few years of disappointments, he added, "I follow a certain template that allows me to have some success. Test cricket is a different ball game, getting that big score will give me confidence moving forward. I was trying to be mindful of that. You need to be disciplined, I kept talking to myself. I wanted to make a big score and get my team into good positions.”

Sharma was thankful for the team management, coach Ravi Shastri, and captain Virat Kohli for backing him. "I am thankful to the management for the opportunity. Considering how the series has gone by, I can take a lot of positives, especially how to counter that new ball. The new ball will be a threat anywhere in the world."