South Africa defeated New Zealand by 5 wickets with 40 balls to spare in the third and final ODI at the Eden Park in Auckland. With this easy victory, the Proteas have whitewashed the Kiwis 3-0 in The National Bank ODI Series.

Bowling first after winning the toss, South Africa bundled out the Black Caps for a modest 206 in 47 overs. Tall fast bowler Marchant de Langue making his ODI debut claimed figures of 4-46 to get the Man of the Match later on. New Zealand struggled right from the start against the pace battery of the Proteas. 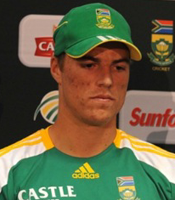 The top scorer of the hosts was Skipper Brendon McCullum who made 47 from 59 balls with 6 Debutant Colin de Grandhomme impressed with a run-a-ball 36 that had a four and three sixes.

The run chase for the visitors was pretty easy with the solid Hashim Amla setting up things at the top of the order with 76 (from 89 balls with 7 fours). Albie Morkel getting a promotion to no.3 helped himself with 41 (from 51 balls with 2 fours and 3 sixes).