Mathematically, Pakistan still has a chance to qualify for the semis. Practically speaking though it's more of mathematics than mathematics that Sarfaraz Ahmed’s

Mathematically, Pakistan still has a chance to qualify for the semis. Practically speaking though it's more of mathematics than mathematics that Sarfaraz Ahmed’s men require to displace New Zealand from spot four. 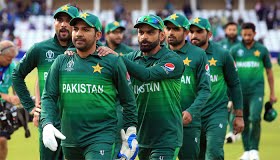 Like Pakistan, Bangladesh too can't make it. But both sides should be proud of the way they have performed. In plain simple terms, the four sides who have qualified have been the better ones, New Zealand only just. In hindsight, Pakistan would rue the fact that they did not bring in Haris Sohail earlier. His presence instead of Shoaib Malik has made a significant difference to the team.

Babar Azam has been the standout performer for Pakistan with the bat. His hundred against New Zealand was a top-class effort and he has carried the weight of the team's batting on his shoulders considering Fakhar Zaman and Mohammad Hafeez have not lived up to the expectations. In the bowling, the decision to bring back Mohammad Amir proved to be the game changer. Shaheen Afridi has also impressed in the chances he has been given.

Bangladesh should be mighty pleased with the effort they have put in despite falling short of qualification. They overcame South Africa in a brilliant fashion very early in the tournament. The triumph against West Indies was even more sensational. Shakib Al Hasan has been outstanding with the bat and highly efficient with the ball, proving he is the best all-rounder of the current generation.

Among the others, the experience of Mushfiqur Rahim and Mahmudullah has come in very handy. They would, however, be disappointed with the efforts of Tamim Iqbal and Soumya Sarkar, who have not done enough considering their ability. Luckily for Bangladesh, Mustafizur Rahman has led the attack admirably with skipper Mashrafe Mortaza being unable to deliver. Like Pakistan, Bangladesh too would want to finish the tournament on a memorable note.