Upcoming Karnataka batsman Karun Nair has been chosen to replace the injured Shikhar Dhawan in the Indian squad for the third Test against New Zealand at Indore. Here are some interesting facts about the 24-year-old batsman

Upcoming Karnataka batsman Karun Nair has been chosen to replace the injured Shikhar Dhawan in the Indian squad for the third Test against New Zealand at Indore. Here are some interesting facts about the 24-year-old batsman. 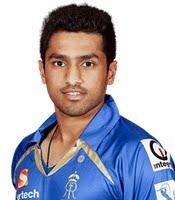 Although a Malayali, Nair plays Ranji Trophy for Karnataka. Interestingly, he was born in Jodhpur in Rajasthan.

He made his one-day debut for India earlier this year. He played in two matches in Zimbabwe, June 11 and June 13 at Harare. Nair scored 46 runs in the two games, with a highest of 39, and an average of 23.

Nair made his first-class debut for Karnataka versus Punjab at Hubballi in December 2013.

So far, Nair has featured in 34 first-class matches, and has scored 2519 runs at an average of just under 50, with seven hundreds, 10 fifties and a best of a mammoth 328.

The sensational 328 came in the 2015 Ranji Trophy final when Karnataka beat Tamil Nadu by an innings and 217 runs.

In List A, Nair has played 49 matches, but has not been as successful. He has so far scored 1358 runs at an average of 36.70 with one hundred and nine fifties.

He played for Delhi Daredevils in the 2016 IPL, and was purchased for a high price of Rs 4 crore, even though his base price was just Rs 10 lakh.

In his debut Ranji season in 2013-14, Nair was sensational to say the least. He hit hundreds in three consecutive Ranji matches. This run included the quarter-finals as well as the semi-finals. Further, he hit the winning six that saw Karnataka lift the Ranji Trophy after 15 years.

In 2015, Nair was selected in the Test squad in Sri Lanka as a replacement for the then injured Murali Vijay. But, he did not get a chance to make his debut.

Whether or not he gets a chance to play at Indore is another matter altogether. He is definitely one to watch out for in the future.