Pacer Jasprit Burmah became India’s leading wicket-taker in T20Is with 53 scalps while skipper Virat Kohli became the fastest captain to 11,000 international runs as India got the better of an under-performing Sri Lanka with ease at Pune, by 78 runs. Batting first, India posted an impressive 201 for 6 on the board, after which Sri Lanka folded up for merely 123, without putting up much of a resistance.

Kohli needed just one run at Pune to cross 11,000 international runs, and he reached the feat in the 13th over of the Indian innings, having demoted himself to allow other batsmen in the team to make a mark. Kohli got to 11,000 international runs in 196 innings going past Ricky Ponting’s record. The former Aussie skipper had reached the landmark in 252 innings. Among Indians, MS Dhoni (324 innings) is the only other captain with 11,000 plus international runs. Overall, three over former captains have achieved the feat -- Graeme Smith (14,878 in 286 matches), Stephen Fleming (11,561 in 303 matches) and Allan Border (11,062 in 271 matches). 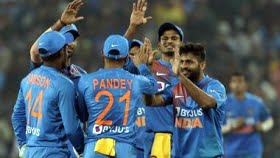 As for Bumrah, in his second match after returning from injury, the fast bowler went past spinners Ravichandran Ashwin and Yuzvendra Chahal to move to the top of the list among Indian bowlers with most T20I wickets. At the start of the match, Bumrah was tied with Ashwin and Chahal at 52 wickets. He went past the duo by when he had Sri Lankan opener Danushka Gunathilaka caught for 1 early in the innings. Bumrah’s senior bowling partner at Mumbai Indians, and current Sri Lankan T20I skipper, Lasith Malinga holds the record for most T20I wickets -- 106.

Earlier, batting first at Pune, India put up an impressive total on the board. Under-pressure Shikhar Dhawan and in-form KL Rahul contributed fluent fifties as India crossed 200 batting first. Sanju Samson failed to make an impact in his comeback match while Shreyas Iyer fell for 4. However, blazing cameos from Manish Pandey (31 not out from 18), Kohli (26 from 17), and Shardul Thakur (22 not out from 8) hauled India to an impressive first-innings total. Lakshan Sandakan (3 for 35) stood out for the visitors even as the other Sri Lankan bowlers struggled.

Sri Lanka’s response got off to a horror start as they crumbled to 26 for 4 in 5.1 overs. After Bumrah sent back Danushka Gunathilaka, Shardul Thakur accounted for Avishka Fernando while Navdeep Saini got Kusal Perera with another unplayable yorker. In between, Oshada Fernando was run out after a horrible mix-up. Dhananjaya de Silva (57) and Angelo Mathews (31) shored up the innings. However, after Mathews was caught off Washington Sundar, the floodgates opened again. The Lankan innings folded up in 15.5 overs. Saini once again finished with impressive figures of 3 for 28 while Thakur and Washington Sundar picked up two scalps apiece.