England all-rounder Ben Stokes has gained significantly in the ICC Test rankings, following his heroics at Headingley. Stokes, who slammed an unbeaten 135 to lead the Englishmen to an unfathomable triumph over Australia to keep the Ashes alive, has jumped to the second spot among all-rounders. Among Test batsmen as well he has risen to the number 13 ranking.
Meanwhile, India pacer Jasprit Bumrah has broken into the Top 10 in Tests for the first time following his impressive showing in the Antigua Test against West Indies. Incredibly, Bumrah has become the first bowler from Asia to claim five-wicket hauls in South Africa, England, Australia and West Indies. He has leaped to the seventh spot in the bowling rankings. 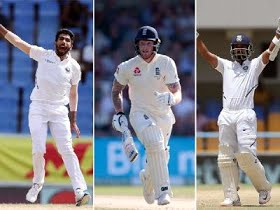 Pat Cummins continued to top the bowling rankings with consistent performances. Trent Boult has re-entered the Top 5 following his success in the Colombo Test while Ravindra Jadeja completes the Top 10. Boult reached 250 wickets in the Sri Lanka Tests.

In the batting charts, Ajinkya Rahane -- the man of the match at Antigua with 81 and 102 -- climbed 10 places and is now on the verge of breaking into the Top 10, currently placed at the number 11 slot.


Dimuth Karunaratne, Joe Root and Tom Latham, all of whom have impressed in their recent games, have risen in the ranking table, and find themselves at numbers 6, 7 and 8 respectively. The batting chart is led by Virat Kohli with 910 points, followed by Steve Smith with 904. Kane Williamson and India’s Cheteshwar Pujara are at number three and fourth respectively.


In the recent Test results, England stole a sensational one-wicket win over Australia at Headingley, New Zealand rolled over Sri Lanka by an innings at Colombo to square the series while India bulldozed West Indies at Antigua.


--By A Cricket Correspondent