Former Sri Lanka skipper Arjuna Ranatunga has hit out at the Sri Lankan Cricket Board after the home team's humiliating loss to India in the three-match series.

Former Sri Lanka skipper Arjuna Ranatunga has hit out at the Sri Lankan Cricket Board after the home team's humiliating loss to India in the three-match series.

Ranatunga went to the extent of saying that the players could not be blamed as the management is the one responsible for the mess.

"Sri Lanka cricket is going through the worst period. You can't blame only the players, they are demoralised. It is the fault of the management,” Ranatunga was quoted as saying in an AFP report.

Ranatunga once again called for Sri Lanka Cricket chief Thilanga Sumathipala to be sacked, and even requested ICC to look into the functioning of the board. 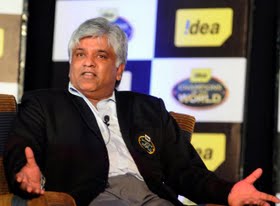 "We don't have selectors with a backbone," Ranatunga earlier told AFP.

Ranatunga has even alleged Sumathipala of being finvolvement in gambling. Reacting to the same, Sumathipala had told AFP last week, "Every time the game is affected at the middle, Sri Lanka cricketers are not performing to the expectation, we hear this kind of noise coming from the same quarter.”