Even as the Coronavirus pandemic continues to wreck havoc in India, BCCI President Sourav Ganguly has stated that every possible angle is being explored to try and see if the tournament can go ahead this year. Ganguly added that the possibility of holding the tournament in front of empty stands is also being considered seriously.

IPL 2020 was initially scheduled to be held in March-April this year. However, it had to be postponed indefinitely in the wake of COVID-19. In an email to state associations, Ganguly assured that every effort is being made towards hosting the IPL this year.

"The BCCI is working on all possible options to ensure that we are able to stage the IPL this year, even if it means playing the tournament in empty stadiums," Ganguly wrote in a letter. 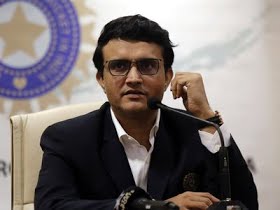 "The fans, franchisees, players, broadcasters, sponsors and all other stakeholders are keenly looking forward to the possibility of IPL being hosted this year," he further wrote in the letter.

Ganguly also stated that cricketers from both India and overseas are hopeful of the IPL show going ahead this year. "We are optimistic and the BCCI will shortly decide on the future course of action on this," Ganguly added.

The chances of the IPL going ahead heavily depends on ICC's decision over the T20 World Cup scheduled to be held in October-November this year. The international cricketing body has deferred a decision on the same till next month. There is a possibility of BCCI using the window for IPL in case the World Cup event in Australia gets postponed.

Meanwhile, IPL Governing Council Chairman Brijesh Patel told indiatoday.in that India remains the first-choice venue for hosting the event even as the UAE cricket board recently offered to host the tournament. "It depends on how the situation is. We have to consider the Covid-19 situation at that point in time. Then we will decide where to host it. India is the first preference to host the IPL," Patel said.