Defending champions West Indies bounced back to demolish hosts Bangladesh by 73 runs. The Tigers played very poorly to get bowled out for just 98 chasing West Indies’ total of 171.

Defending champions West Indies bounced back to demolish hosts Bangladesh by 73 runs. The Tigers played very poorly to get bowled out for just 98 chasing West Indies’ total of 171.

The first half saw Dwayne Smith muscle the ball around in the gaps to score 72 from 43 balls with 10 fours and 3 sixes. His partner Chris Gayle took all the time in the world and before he got out, scored 48 from 48 balls with 3 fours and 2 sixes.

The Bangladeshi fielding was absolutely terrible. Even their Captain and Wicket Keeper Mushfiqur Rahim was untidy conceding 10 byes. West Indies finished with 171 for 7 thanks to Smith’s knock. For Bangladesh, Al Amin Hossain bowled well to take 3 for 21 in his 4 overs. 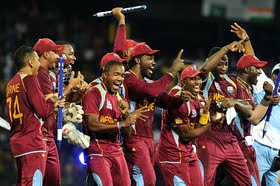 Bangladesh in their run chase were pegged back with three early wickets. Left-arm medium pacer Krishmar Santokie mixed his slower ones beautifully to have opener Anamul and Shakib Al Hasan dismissed in consecutive deliveries.

Leg spinner Samuel Badree in his second spell wrecked the Bangladeshi ship taking three wickets in the 11th over. The hosts slipped to 59 for 7 by the end of Badree’s over. The leg-spinner finished with 4 for 15 in 4 overs while Santokie took 3 for 17 in his 4 overs. Dwayne Smith got the Man of the Match award.