Team India opener Mayank Agarwal continued his purple patch, hitting a magnificent 243 on the second day of the first Test against Bangladesh at Indore on Friday.

Team India opener Mayank Agarwal continued his purple patch, hitting a magnificent 243 on the second day of the first Test against Bangladesh at Indore on Friday. Courtesy Agarwal’s superlative innings, India finished the day on 493 for 6, with Ravindra Jadeja unbeaten on 60, and Umesh Yadav racing away to 25 in 10 delivers. By the end of day’s play, India’s lead had swelled to 343.

Agarwal, who was dropped late on Day 1, made Bangladesh pay dearly for the let-off. He occupied the crease for 330 balls for his 243, which featured 28 hits to the fence, and eight over hit. Agarwal brought up his double hundred in a manner that would remind many of Virender Sehwag, by smashing spinner Mehidy Hasan for a six into the stands. In fact, during the knock Agarwal also equaled Navjot Singh Sidhu’s Indian record for most sixes in an innings. 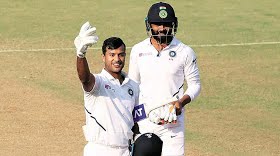 After Cheteshwar Pujara was dismissed for 54, and skipper Virat Kohli fell without scoring, Agarwal featured in a huge stand of 190 for the fourth wicket with Ajinkya Rahane (86). Agarwal looked set to cross 250, when a mistimed slog-sweep off Hasan, whom he had been severe on, brought the curtains down on a fantastic innings.

Speaking after the day’s play, Agarwal revealed that letting go of the fear of failure has been the turning point in his career. "In terms of mindset, the fear of failure and letting go of it helped me change a lot. After that, I got hungry for runs. There have been times where I haven't gotten runs. Every time I get set, I try to make it a point to convert into a big score," explained Agarwal.

Agarwal also praised Rahane, with whom he featured in a big stand on the second day. Rahane and Agarwal brought India back on track after Kohli’s rare failure. "He's (Rahane) a senior pro, he's played a lot of Test cricket and kept guiding me throughout. The plan was to get a small partnership and take our time. Be cautious, then it was about building it more and more," Agarwal further added.

The opener described the wicket as a true one, which has bounce and value for shots as well. "I back myself and was watching the ball well and picking it. There is bounce on this wicket and there is full value for shots. I went after anything I felt that was in my arc," he further stated.