England captain Eoin Morgan rewrote the record books by smashing 148 against Afghanistan, a knock which included 17 sixes -- the most by any player in an ODI game. It was also the fourth fastest World Cup century, coming off 57 balls.

Thanks to Morgan blitz, England finished with a massive 397 for 6 and went on to win the match by 150 runs. The bowlers were also relentless as Jofra Archer took out Noor Ali Zadran in the second over. Hashmatullah Shahidi’s 75 while Asghar Afghan and Rahmat Shah got starts but Aghanistan were never in the hunt in the chase. 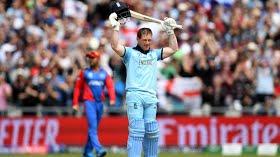 Speaking about his innings after the game, Morgan said that he himself was surprised with the kind of innings he played. “I think I’m probably just becoming a target for the guys in the changing room to take down. The hundred I scored is considered a slow one in our changing room – guys talk about it all the time. So it’s a tough school.

“Never have I ever thought I could play a knock like that but I’m delighted that I have. It’s weird. It’s very strange to have that sixes record. It’s something, along with the innings, I never thought I’d do. It’s a nice place to be," the England captain said.

Morgan said he has been in good batting form over the last four years and is happy that his big knock has come at the World Cup stage.

“To be fair, the last four years, I’ve probably played the best in my career, but that hasn’t involved a 50- or 60-bowl 100. I scored one in Middlesex that was I think 55 or 56. So I thought I could – I would have it in the locker somewhere, but it’s never happened. So I sort of gave up on it a little bit,” he said.

“You know, the Champions Trophy two years ago, I had a couple of scores; I would have like to have gotten more. But this is where it matters. All the work over the last four years, over the course of my career, it’s, yeah, it all sort of comes to a front now," he further stated.

The match saw Rashid Khan being taken for 110 runs in nine overs, included 11 sixes, seven of which were by Morgan. However, Morgan dismissed any talk of there being a deliberate attempt to target him.

“It certainly wasn’t deliberate. We don’t go into any game with any preconceived ideas about how guys can play, because anybody can have a bad day. He’s obviously a very, very good bowler, and we’ve experienced that before. He’s performed extremely well for a long period,” he said.

“But like all good players, you know, it’s when you. You probably learn the most about yourself when your backs are against the wall, and it’s probably the same case," the England captain further stated.