Having staved off the England challenge in Dubai, Pakistan would be confident of putting up another solid effort in the final Test at Sharjah

Having staved off the England challenge in Dubai, Pakistan would be confident of putting up another solid effort in the final Test at Sharjah. They will be under lesser pressure as compared to England, for they cannot lose the series from here, and would thus be raring to have another go at the Englishmen. Alastair Cook’s men on the other hand would be an anguished lot. They should have won the opening Test at Abu Dhabi, but were done in by bad light. At Dubai then, they came exasperatingly close to saving the Test, but Adil Rashid’s heroics were in vain.

The batting for both sides has been impressive, particularly from the experienced lot. Cook and Joe Root have done well for England while Misbah-ul-Haq and Younis Khan have stood up and delivered for Pakistan. But, there are issues for both sides here as well. Ian Bell has got starts, but has failed to convert the same. Moeen Ali is likely to continue opening, but he hasn’t looked comfortable. Following another poor Test, Jos Buttler is also set to sit out of the final game. Jonny Bairstow also needs to do better than 30 and 40s.

For Pakistan, Shan Masood has been a failure at the top of the order. He has been easily taken out by James Anderson more than once in the series. With Azhar Ali fit, he is all set for a comeback, and should replace Masood at the top of the order. Also, Shoaib Malik returned to Test cricket with a bang, compiling a double hundred at Abu Dhabi, but since he has registered three single-figure scores in a row. Pakistan have been dealt with another blow, as Imran Khan has been ruled out with a hand injury. Rahat Ali is set to take his place in the team. 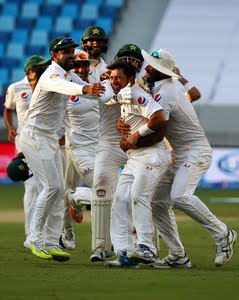 There are changes likely in the England team as well. As mentioned earlier, Buttler’s poor form refuses to die. He is all set to sit out of the final Test. In his absence, Bairstow, who has done better with the bat, will take over the gloves, and the former’s place in the team will be taken by James Taylor, who hasn’t played a Test since 2012. With Mark Wood also picking up another injury, Liam Plunkett may get another chance to resurrect his Test career, unless of course they decide to go for spin in the form of Samit Patel.

The Pakistan team were bolstered by the presence of Yasir Shah in the second Test, and he certainly made a big difference in Dubai with eight scalps. Shah’s leg spin will remain a major challenge for England at Sharjah as well. In the company of Shah, Zulfiqar Babar too was more efficient. But, it was Wahab Riaz who was the man of the match for his inspired first-innings spell. England’s batting will face a massive challenge to keep these in-form bowlers at bay. If they manage to do the same, it will augment their chances of victory.