"After the India match I said to my boys, the tournament is not finished yet. We played very well and now we have won the final," he said.

Praising Fakhar Zaman, he added, “He's a great impact player, in his first ICC event, he played like a champion, he can be a great player for Pakistan. 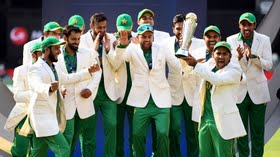 "It's a young team, credit goes to my boys, this tournament can be a great booster for us. We played like we had nothing to lose, now we are champions," said Sarfraz.

Sarfraz also hopes international cricket now returns to Pakistan. “It is sad that we have not been playing at home for eight years,” he added.

On the turnaround, Sarfraz explained, “I told the boys that there was lot of cricket remaining to be played. Thanks to the coaching staff, it was possible to stage this turnaround and win the trophy.

“Hopefully everyone will remember this win, not today, not tomorrow, very long, long time,” said Sarfraz.

Sarfraz added losing the toss worked in their favour, in hindsight. “We would have loved to bowl first but I also thought that if we can score 280, it will put pressure on the opposition.,” he said.

“It’s not about me and my career, it’s about 15 unbelievable players in that dressing room who have been absolutely fantastic for the last year. So that’s what it should be about,” he concluded.