Sunrisers Hyderabad has beaten Chennai Super Kings by 22 runs in IPL 8 at Hyderabad. Skipper David Warner’s counter attack helped their team to put an imposing total of 192 runs and bowlers too responded well with taking wickets at the regular interval to restrict CSK at 170. 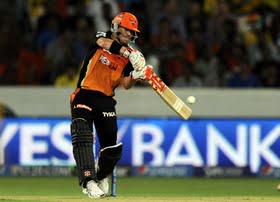 Winning the toss and deciding to bowl first, the decision turn out to be horrible for the Chennai when the opening pair of David Warner and Shikhar Dhawan started to score runs freely and at brisk rate. No any bowler were able to made any impact with the ball what so ever as Warner completed his half century off just 20 balls. Warner seemed to be ruthless against all the fast bowlers especially against Mohit Sharma. The openers added 86 runs in 8 overs before part timer Suresh Raina provided CSK the much needed breakthrough. Thereafter, wickets keep fumbling but home team made sure that they not lose the momentum in run rate. Henriques and Naman Ojha too played good hands in the middle overs. The late cameo from Eoin Morgan made sure that Hyderabad will end their inning on a high note.

Chasing a mammoth score of 193 runs, Chennai made a promising start when Brendon McCullum hit three consecutive fours in the first over of the inning. But in the next over, McCullum failed to control the excess bounce of the delivery and played onto his wickets. From there on, Chennai never looked in the game and keep losing wickets when they looked to be crushing towards the target. Most of their batsmen had got start but thrown their wicket away. The main turning point of the game was the run out of Faf du Plessis and MS Dhoni was bowled on the very next ball of Ashish Reddy. Chennai never recovered from these two blows and rest of the batting didn’t had that capability to chase over more than ten runs per over for more than ten overs.

Trent Boult was very expensive today but the Henriques and Bhuvneshwar Kumar was the pick of the bowlers for the Hyderabad.

This was the fourth win for the Sunrisers and they are on the fourth spot whereas Chennai still retaining their top spot in the points table with six wins.