India’s oldest first-class cricketer, Vasant Raiji, passed away in the early hours of Saturday at the age of exactly 100. A right-handed batsman, Raiji made his debut for Cricket Club of India against Central Provinces and Berar in Nagpur in 1939. Raiji made his Mumbai debut in 1941 for Western India with Vijay Merchant as captain.

The former cricketer played nine first-class matches in the 1940s, and scored 277 runs with a highest score of 68. A chartered accountant by professional, Raiji went on to make a name for himself as a cricket historian. On January 26 this year, Raiji celebrated his 100th birthday in the presence of Sachin Tendulkar and Steve Waugh. 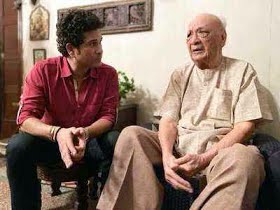 “He (Raiji) passed away at 2.20 am in his sleep at his residence in Walkeshwar in South Mumbai due to old age,” Raiji’s son-in-law Sudarshan Nanavati told PTI.

Tributes from Board of Control for Cricket in India (BCCI) and Indian legends started to flow in following Raiji’s demise. “BCCI mourns the sad demise of Vasant Raiji. The former first-class cricketer and historian, who turned 100 this year in January, passed away in his sleep,” the Indian cricket board tweeted.

Tendulkar recalled Raiji as a warm person and someone who was extremely passionate about cricket. “I met Shri Vasant Raiji earlier this year to celebrate his 100th birthday. His warmth and passion for playing and watching Cricket was endearing. His passing away saddens my heart. My condolences to his family & friends,” he posted on his social media account.

Former India all-rounder Yuvraj Singh also offered his condolences to the family. “My condolences on the passing away of Shri. Vasant Raiji, India’s oldest first-class cricketer. Praying for the family’s strength in this hour of grief,” Yuvraj tweeted.

Noted sports journalist Boria Majumdar revealed that Raiji was of immense help to him at the start of his career. “He had been a huge help when I started out research in the late 90s on the sport that has helped me make a career. #VasantRaiji RIP your memories of watching the first Test at Bombay GYM – stories I will always remember with fondness,” Majumdar’s tweet read.