Virat Kohli: India did not deserve to win

After India’s nine-wicket loss to West Indies in the lone T20 international at Sabina Park, Indian captain Virat Kohli said that India did not deserve to win the match since they dropped catches

After India’s nine-wicket loss to West Indies in the lone T20 international at Sabina Park, Indian captain Virat Kohli said that India did not deserve to win the match since they dropped catches, and were not great with both bat and ball.

India scored 190-6 after Kohli (39) and Shikhar Dhawan (23) gave India a good start. But, afteRishabh Pant and Dinesh Karthik featured in an 86-run stand, India faltered, and could not cross 200. They were poor in the field as well. 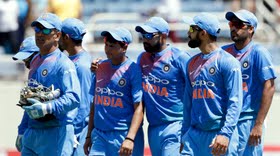 Analysing India’s performance, Kohli said, "Even in the first innings, we could have added 25-30 extra. We were on course for 230. And in the field as well, we dropped a few chances and if you don't grab them you don't deserve to win."

"If you give a good start up the order, one batsman has to bat through. I think Dinesh was good, but we needed someone to get 80-90 which a team needs in T20 cricket. Then we didn't start well with the ball and didn't field well either. All these games are good feeders of how guys react to situations," he added.

On India's T20 team, Kohli further said, "West Indies have a good T20 team, they have carried on with the same team for a couple of years. And in experimental stage, we'd have up and downs. But we need to keep going. One game in the ODIs we lost, we won three convincingly. T20s is anyone's game, and one game doesn't make a series according to me," Kohli said.