In a series dominated by batsmen, Australia thumped India 4-1, narrowly missing out on a whitewash. As India and Australia now prepare for the T20s, here’s a look at the top performers in the series, most of whom are, not surprisingly, batsmen

In a series dominated by batsmen, Australia thumped India 4-1, narrowly missing out on a whitewash. As India and Australia now prepare for the T20s, here’s a look at the top performers in the series, most of whom are, not surprisingly, batsmen.

Rohit Sharma: Even as India lost the series 4-1, Rohit was the standout batsman across the two teams. In five innings, he totalled a massive 441 runs at an average of 110.25 with two hundreds and one fifty. His strike rate too was over hundred. Rohit’s scores in the series tell a story in itself. He began with an unforgettable 171 not out at Perth, and went on to delight with 124 at Brisbane. After falling for 6 at Melbourne, Rohit finished the series with 41 at Canberra and 99 at Sydney, the last of which eventually resulted in a victory. The series returns have vindicated that Rohit is heading towards the path of greatness in ODIs. 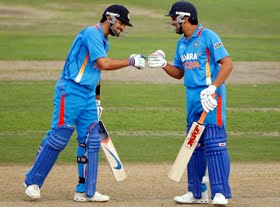 David Warner: The Aussie opener was available for only three of the five matches, and yet finished among the top run-getters, with 220 runs, inclusive of a hundred and a fifty, at a strike rate of 102. After falling for 5 at Perth, he came back and finished off the series with 93 at Canberra and 122 at Sydney, giving him an average of 73.33. India would be thankful that he was away for two matches, else their bowlers’ figures would have been worse.

Virat Kohli: That Kohli loves Australia is no secret, and he continued his love affair against his favourite country, even though the results were not always in his team’s favour. Kohli was the second leading run-scorer with 381 runs at an average of 76.20 with two hundreds and as many fifties, at a strike rate of a shade under 100. He scores in the series were 91, 59, 117 and 106 before he fell for just 8 in the final match.

Steven Smith: If Kohli loves Australia, Smith feasts on India. The skipper finished the series with 315 runs at an average of 63 with one hundred and a fifty at a strike rate of 107.5. Towards the second half, India found some belated success against Smith.

Shikhar Dhawan: The Indian opener began the series under immense pressure, and failures in the first two matches did not help. But, the left-hander found an escape route again, and scored a hundred and two fifties in the last three matches. Those knocks meant Dhawan finished the series with an impressive tally of 287 runs at an average of 57.4 and a strike rate of 100.34.

George Bailey: The former skipper had a good series as well, with 227 runs at an average in the mid-50s, hitting a hundred and a fifty. He scored his runs at a strike rate of just over 100.

John Hastings: In a series dominated the batsmen, Hastings stood out. He finished with 10 wickets at an excellent average of 21.50, and a strike rate of 22.8.

Kane Richardson: The bearded paceman deserves a mention for the five-for at Canberra that destroyed the Indian chase. He finished the series with six wickets at an average of 29.50 and an impressive strike rate of 28.