ZIM vs PAK 2nd ODI Live Score, Preview: Be it T20s or the first T20, the Zimbabwe-Pakistan series has followed a rather repetitive pattern.

Be it T20s or the first T20, the Zimbabwe-Pakistan series has followed a rather repetitive pattern. Pakistan have batted first in all games, have got off to poor starts, but have recovered to post somewhat decent totals. Then, they have easily overcome the Zimbabweans thanks to their bowlers, who have been in excellent form. The Zimbabweans have just not have had any answers to the queries posed by the Pakistan bowlers, which would worry them a lot. In another sense, it also means that while Pakistan have been winning games, they clearly have a weakness in the batting department which needs to be rectified. 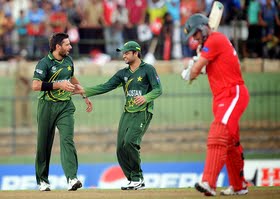 Looking at Zimbabwe first, they are the one who will be under immense pressure going into the do-or-die clash. Their batting against spin will be most important in the wake of their disastrous effort in the last clash. Zimbabwe have never been great players of spin, but they have the ability to better than they did in the first game. Yasir Shah was all over them, and even Shoaib Malik, who isn't the same bowler he was till a few years ago, managed three. In fact, all ten Zimbabwean wickets in the match fell to spin, an aspect that should worry them. Unless they are able to tackle slow bowling effectively, it is difficult to see the struggling hosts compete in the series.

Zimbabwe have it in them to compete. In fact, they have batsmen who have done well against quality attacks. What they need is for things to fall into place. Chamu Chibhabha was in superlative run against India, but has failed with the bat so far although his bowling has proved effective. Zimbabwe will want him back among the runs. A bright start from him and Brian Chari, who made a failed debut in the first match will help the side. Skipper Elton Chigumbura and Hamilton Masakadza are two veterans who will be expected to do well more often than not. Sean Williams and Sikandra Raza also need to get crucial runs.

While the bowling has done well, here too they will seek improvements. In all the games, they have started off confidently, but have failed to finish off well, thus allowing the opponents to claw back from tense situations. Luke Jongwe, Tinashe Panyangara and Graeme Cremer all began nicely, but lost their way when the pressure began to tell. Zimbabwe can ill-afford such lapses particularly in the match on Saturday. They need to find a way to keep the pressure on after the initial onslaught. This certainly wasn't the case in the previous match, when they managed to take a total of only six wickets. This is the one area where Zimbabwe are losing out with the ball.

As for Pakistan, there are two ways they can look at things -- one, they are expectedly winning and second, they are claiming victories but not in the comprehensive manner that they should. The chief reason behind the same is the fact that their batting hasn't fired in the manner that it should. The top and middle order is particularly struggling with the likes of Mohammad Hafeez, Ahmed Shehzad and Sohaib Maqsood not succeeding. The fact that skipper Azhar Ali also had a rare failed in the previous match did not help matters. They cannot always be bailed out by the lower order, which is why the top order must start firing.