Indian skipper Virat Kohli will undergo scans following the shoulder injury he picked up on Day 1 at Ranchi.

The Indian captain dived near the boundary in the 40th over, and he was then seen clutching his right shoulder. Kohli went off the field, and did not come back, sporting an ice-pack on the shoulder in the dressing room. Ajinkya Rahane led the side in Kohli's absence. 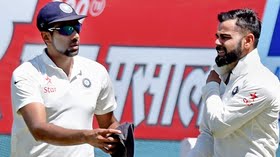 "As far as the technique of the dive is concerned, I think it was quite an intense chase to the boundary line and in his intent to save that one run, he stopped the ball and landed on his right shoulder when he rolled over. The impact was quite heavy because of the momentum he was carrying and so there was a shock on his right shoulder. That is the current status," said R Sridhar, the team's fielding coach told the media in the post-day press conference.