New Zealand have reasons to be positive

Ross Taylor-led New Zealand weren’t expected to win the two-Test series against India by any stretch of the imagination. India were always expected to sail home, but genuine cricket fans must have hoped for New Zealand to put up a tough fight, so that the short series doesn’t end up being boring.

Ross Taylor-led New Zealand weren’t expected to win the two-Test series against India by any stretch of the imagination. India were always expected to sail home, but genuine cricket fans must have hoped for New Zealand to put up a tough fight, so that the short series doesn’t end up being boring. The Kiwis failed miserably in that aspect at Hyderabad, but made amends with a more improved showing at Bangalore even though they lost inside four days in the end. The spirit of a fight that was missing in their effort in the first Test was definitely present at Bangalore. 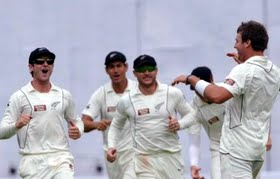 Amongst the biggest positive for New Zealand from the Bangalore game was the form of paceman Tim Southee. Remember that he wasn’t preferred for the opening Test, but was drafted into the XI for the second Test in place of the veteran Chris Martin. It was a tough decision since even though Martin did not taste a lot of success at Hyderabad, he didn’t do so badly as to get dropped. The risk of bringing in the unpredictable Southee however worked perfectly for New Zealand. The pacer not only maintained a probing line throughout the same, but also moved the ball prodigiously, troubling the best of India’s batsmen.

Although the spinner Jeetan Patel wasn’t expected to trouble the Indians a lot, he did end the series with his reputation of being a decent tweaker intact. The Indian batsmen took him lightly for most part, and Patel gained full advantage of the complacent attitude of the Indians, by adding some big scalps to his name. Even though the much more versatile Daniel Vettori’s left arm spin could have made a bigger difference, Patel did his best to ensure that the former captain’s absence wasn’t felt as much.

Like with their bowling, the Kiwis showed marked improvements with the bat as well at Bangalore. It helped that they were led by the skipper Taylor himself, who came out and played a once-in-a-lifetime innings. His slam-bang approach was fraught with risk, but the way he batted in New Zealand’s first innings, it just seemed that he knew it was going to be his day. During the time that he was at the crease, he made the Indian attack look miserable, finding the boundaries at will. It was Taylor’s back-to-the-wall hundred that gave Kiwis the confidence to stage a fightback. Inspired by his skipper, Kruger Van Wyk also played a measured knock and helped New Zealand to a competitive first innings total.

At various points in the series, Brendon McCullum and Kane Williamson also looked good while in the bowling Trent Boult and Doug Bracewell did a tidy job, even though their overall figures did not reflect the same. Following the travails in West Indies, this was a definite improvement for New Zealand. The only reason they lost the series was because India possessed better capabilities given the conditions. There was definitely no shortage of commitment.