Shikhar Dhawan on what makes India number one

India opener Shikhar Dhawan who missed the recent One-day International (ODI) series against Australia due to personal issues is back for the T20s starting on October 7.

Dhawan has been integral to the rise of India to the number one ranking in ODIs. Speaking about the same, he told NDTV exclusively, "The reason we are No.1 is because we have got good matured players in the side and the youngsters also are very confident. I believe sharing the dressing room with established players in the IPL has helped them gain confidence.”

"The bench strength is also the reason that the Indian team is so good now. We have a very healthy competition in the side. Every player knows if he doesn't perform there is other batsman who is as good as him, so that's a very good sign and that keeps everyone on their toes,” he further told NDTV. 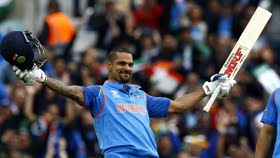 On how difficult it was to make a comeback after being dropped last year, Dhawan revealed, "It was a hard time for me because I was giving my best but things were not going my way. When I was dropped from the Test and T20 team, of course I felt bad but I knew that I hadn't performed that well that's why I got dropped.”