Despite having been held to a 2-2 draw in the Tests, England went into the ODI series against Pakistan as favourites, owing to the strength of their side as well as their current form. And, if the first ODI was any indication, Pakistan would have a tough time competing with the hosts in the series

Despite having been held to a 2-2 draw in the Tests, England went into the ODI series against Pakistan as favourites, owing to the strength of their side as well as their current form. And, if the first ODI was any indication, Pakistan would have a tough time competing with the hosts in the series. England were all over Pakistan in the opening match. Bowling first, they restricted the visitors to a very much gettable total despite a fluent half-century from Azhar Ali. Then, with the bat, they comfortably beat rain to come up trumps via the D/L method.

The fact that England's bowlers managed to restrict Pakistan to 260 was definitely instrumental in their victory. To be in with a fair chance of winning, Pakistan needed to post something close to 300 on the board. And, they had a chance of doing so when they found themselves in a good position to go for the final push. But, as has often been the case, they struggled for the final push in the slog overs. From 178 for 3 in the 36th over, they could only muster 260. This despite the fact that they ended up losing only six wickets. The phase proved to be a crucial one in the match, as Pakistan squandered the advantage.

England, on the other hand, batted with positivity, even as the threat of rain was around. Chasing keeping an eye on the D/L score could often prove to be tricky, but England did not look to complicate things, and continued to bat in aggressive mode. This after the struggling Alex Hales again fell early playing a poor stroke. Jason Roy continued his great form with another impressive half century while Joe Root also joined in the act as England enjoyed themselves at Pakistan's bowlers expense. What the fluent partnership between Roy and Root did was it allowed England to stay ahead of the par score comfortably.

Pakistan struggled in the match because, unlike in the Tests, they did not have reliable batsmen to back up the efforts of their skipper Ali. Mohammad Hafeez has been getting constant chances at the top despite his repeated failures. There was no change in the script as he again fell early. The loss definitely hurt Pakistan. The other opener Sharjeel Khan too could not carry on the great form he displayed against Ireland. Ali found got support from Babar Azam and Sarfraz Ahmed. But, neither of them survived till the end, and with Shoaib Malik also falling early, Pakistan lost momentum. 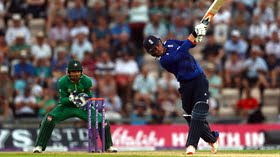 For England, there were some positives in the bowling as well. Making a comeback after an ankle injury, the hosts would not have expected too much from Mark Wood. But, the fast bowler ran in and bowled at an impressive pace, troubling the Pakistan batsmen. It remains to be seen whether he can carry on in the same vein though. England's bowling figures were not sensational in any sense. But, as a team, they did enough to hold Pakistan, and keep them on the backfoot. Roy and Root did the rest. Can the visitors deliver a counter-punch?