Pakistan beat Zimbabwe 2-1 in the three-match one-day series that recently took place in Harare. Although Pakistan batted poorly in the T20s, they managed to win both matches thanks to their superlative bowling efforts

Pakistan beat Zimbabwe 2-1 in the three-match one-day series that recently took place in Harare. Although Pakistan batted poorly in the T20s, they managed to win both matches thanks to their superlative bowling efforts. Even in the ODIs, their bowling stood out. Their batting effort in the one-dayers was much better than that in the T20s, and with a bit of better luck, they could have whitewashed Zimbabwe. As for the hosts, they had their moments, but could not maintain their consistency throughout, and hence ended up on the losing side. A look at the top performers in the one-day series.

Shoaib Malik: The veteran Pakistani is back, and back with a bang. He had a very successful tour, and was the best batsman in the one-dayers by some distance. He made 161 runs in three matches, with two not outs, thus ending with a spectacular average of 161. His 96 not out in the second match almost won the match for Pakistan out of nowhere before bad light played spoilsport. In the other two games, he made 31 and 34 not out. He also claimed four wickets with the ball at an average of 17. Malik claimed 3 for 30 in the first ODI. Easy choice for the man of the series.

Yasir Shah: The leggie was brilliant in the opening game, claiming figures of 6 for 26 to roll over Zimbabwe cheaply. He went wicketless in the second match, but contributed a crucial 32 not out with the bat, providing great support to Malik in the match. Had bad light not intervened, he could have featured in the match-defining partnership. 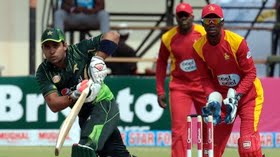 Bilal Asif: He may have been reported for suspect action, but before that the rookie off spinner starred in Pakistan’s series clinching victory in the final match. He claimed 5 for 25 in the match running through the Zimbabwe batting line-up rather cheaply. Then, in the same match, he opened the batting, and smacked a quick 38 to make victory a mere formality for the team.

Imad Wasim: He put up a good all-round show, claiming four wickets at an average of 15, and scoring a half-century as well with the bat. He made 61 in the first match, and picked up 3 for 36 in the last game. Could be an all-round prospect for Pakistan in the future.

Chamu Chibhabha: The Zimbabwe opener continued his good form in ODIs. In three games, he totalled exactly 150 runs at an average of 50 After failing in the first match, he followed up with a match-winning 90 in the second, and contributed a measured 48 in the final match. He wasn’t as effective with the ball as he was in the T20s, claiming a solitary wicket at an average of 80.

Elton Chigumbura: The Zimbabwe skipper had a reasonable series, scoring 89 runs at an average of nearly 30. His best effort was 67 in the second game which Zimbabwe won. With the ball, he managed one wicket at an average of 33.