When it was decided that India and West Indies would play two T20 matches in the USA, the games were obviously seen as an effort towards globalisation of the gentleman's game. But, while the endeavour was right

When it was decided that India and West Indies would play two T20 matches in the USA, the games were obviously seen as an effort towards globalisation of the gentleman's game. But, while the endeavour was right, the execution of the idea was extremely disappointing. Even as India would feel let down, as the disruptions prevented them from what should have been a series-levelling win, the fans were the biggest losers. Many must have come in hoping to get a rare glimpse of their heroes, but all they got was confusion and despair.

One could have understood the abandonment of the game after 22 overs, if the weather was terrible, and not much could be done about it. But, that wasn't the case at Lauderhill on Sunday. In fact, what transpired was utterly embarrassing. At the start of the day, play had to be delayed by 40 minutes, since some technical delays meant the live feed could not be broadcast. With so much riding on television viewership these days, the organisers could not afford to sacrifice the live broadcast. And, hence the game did not start until things were put in order.

Next, India faced only two overs in their chase, before it rained for 20 minutes. Under normal circumstances, the three additional overs needed to constitute a match should have been completed. But, the ground did not have a super soper. And, while the outfield was covered, the bowlers run-ups were dangerously wet. As a result, play could not resume, and India lost their chance to square the series. While it is indeed a good idea to take the game to places where it is not popular, the facilities at these places also need to be brought up to international standards. 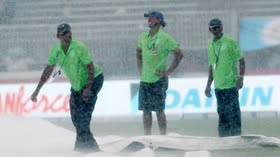 Coming back to the game itself, India bowled exceedingly well to restrict West Indies to under 150. The comeback of Amit Mishra has been the story of the day. In spite of his success in the format, he was kept out of the team for the last couple of years. On Sunday, he was on top of his game, dismissing a rampant Johnson Charles first ball, and then going on to add a couple of more scalps. In fact, all the Indian bowlers made an impact. Mohammed Shami got the big wicket of last-match centurion Ewin Lewis while Ravichandran Ashwin and Jasprit Bumrah chipped in with a couple of key wickets each as well.