Chinaman bowler Kuldeep Yadav made a memorable Test debut for India with 4 for 68 as the hosts restricted Australia to 300 despite Steven Smith’s third hundred of the series, on the first day of the fourth and final Test at Dharmasala

Chinaman bowler Kuldeep Yadav made a memorable Test debut for India with 4 for 68 as the hosts restricted Australia to 300 despite Steven Smith’s third hundred of the series, on the first day of the fourth and final Test at Dharmasala.

22-year-old Kuldeep, came in as replacement for injured Indian skipper Virat Kohli, and was brilliant in the second session as India hit back after a brilliant start by Australia, who went into lunch at 131 for 1. 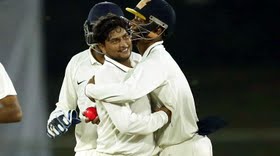 Kuldeep began by dismissing the hard-working David Warner for 56, who finally managed to cross fifty for the first time in the series, having him caught behind with one that spun and bounced.

The chinaman’s bowler’s best ball was reserved for last-match hero Peter Handscomb (8), who was forced to drive, and was bowled between the gate as the ball spun back into him. Glenn Maxwell was also dismissed cheaply by the same bowler, as one turned past him and crashed into the stumps.

Yadav’s fourth wicket came when he sent back a dangerous looking Pat Cummins for 21, as the fast bowler hit one back to the bowler. Having found themselves in trouble at 208 for 6, Matthew Wade’s half-century ensured they reached 300. India faced a single over bowled by Josh Hazlewood and survived.

Earlier, Smith again stood up for his team with a tremendous knock of 111. With him at the crease, the struggling Warner also grew in confidence. The duo added 134 runs for the second wicket before Kuldeep broke the back of Australia’s middle order.

Umesh Yadav claimed to important wickets, including the opening one Matt Renshaw getting through his defence. Ravichandran Ashwin only claimed one wicket, but it was the key one of Smith, who edged one to stand-in captain Ajinkya Rahane at slip. Ravindra Jadeja and Bhuvneshwar Kumar claimed one wicket each.