Sunrisers Hyderabad will face a tough challenge when they take on Mumbai Indians at home,

Sunrisers Hyderabad will face a tough challenge when they take on Mumbai Indians at home, even considering that the latter has lost two of the three games they have played. The hosts are plaqued by both injuries and poor form.

While Yuvraj Singh remains unfit following the ankle he twisted during the World T20 quarter-final, Ashish Nehra and Kane Williamson have also joined the injury list for Hyderabad. To make matters worse, they have been beaten rather comprehensively in both the matches they have played so far -- by RCB by 45 runs and by KKR by eight wickets. Clearly, Sunrisers have a lot to work upon.

Mumbai, on the other hand, would look to get their campaign back on track. They suffered a setback early on when they were mauled by MS Dhoni's Rising Pune Supergiants in the IPL opener. Mumbai came back to defeat Kolkata Knight Riders with a commanding batting effort, but were again undone by Gujarat Lions in their third match.

Mumbai have shown the tendency to be lethargic early on in the IPL. The fact that they won the event last year after having lost their first four matches, has been part of IPL folklore. Even so, Mumbai must get out of the rut early, for there are teams waiting to pounce if they slip.

Apart from injuries, Sunrisers have suffered because they have yet again been heavily dependent on skipper David Warner. And, while the Aussie hasn't disappointed, his knocks haven't been enough to help the team taste victory. Given the kind of experience he has gained now, Shikhar Dhawan must stand up to the challenge and deliver. While Dhawan's struggle is a worry, Hyderabad would be pleased that Eoin Morgan and Naman Ojha got runs against KKR, even if in a losing cause.

Among the bowlers, Bangladesh's Mustafizur Rahman has been extremely impressive. He would though seek support from the likes of the experienced Bhuvneshwar Kumar and domestic veteran Abhimanyu Mithun.

For Mumbai, it has been a clear case of their batting letting them down against Pune and Gujarat. In between though, they excelled against Kolkata, with skipper Rohit Sharma leading the way with a skilful 84. That's more the kind of template Mumbai will be looking at when they take on Hyderabad. They have some hard-hitting T20 batsmen in the form of Kieron Pollard, Jos Buttler and Hardik Pandya. From them, only Pandya has come to the party so far. 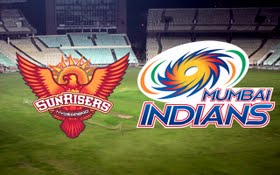 In the bowling department, Mitchell McClenaghan has been in excellent form for the team. The trio of Harbhajan Singh, Tim Southee and Jasprit Bumrah will also be expected to fire.