England defeated Sri Lanka 3-0 in the recently concluded five-match series. Here’s a look at the successful performers from the series

England defeated Sri Lanka 3-0 in the recently concluded five-match series. Here’s a look at the successful performers from the series. 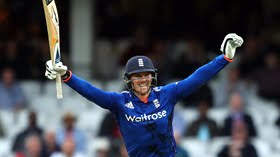 Jason Roy: Without doubt, the England opener was the standout performer of the series. He amassed 316 runs in five innings at an average of well over hundred with two centuries, both of them brilliant ones. His highest of 162 came in that stunning chase in the fourth ODI in a rain-hit encounter. Roy also finished with an impressive strike rate of 119.69, and was deservedly awarded the man of the series award.

Dinesh Chandimal: In a series dominated by England, Chandimal was the only saving grace for Sri Lanka. He grew in stature during the course of the series. In five games he scored 267 runs at an average of 53.40 with as many as four half-centuries to his name. His strike rate was on the lower side, under 80. Although he was consistent throughout the series, the most disappointing aspect of his performance was the fact that he failed to convert his fifties into big knocks, finishing with a highest of just 63.

David Willey: The pacer stood out with the ball for England. He finished the series with 10 wickets from five games at an impressive strike rate of 28, with a best of 4 for 34. Willey’s average was also good at 26.80 while his economy rate was 5.74, very much acceptable by modern day standards. Willey is definitely going from strength to strength with each series.

Liam Plunkett: The tall fast bowler also had a memorable series, using his height to good effect, and bringing all his experience into play. He also claimed 10 wickets from 5 games at an average of 27.10 and a strike rate of 27.6. His economy rate was also similar to that of Willey – 5.89. Plunkett’s best figures in the series were 3 for 44. And of course, he hit that famous six in the thrilling tie.

Angelo Mathews: Despite of not being completely fit, Mathews battled pain and played some quality knocks for the team. He finished the series with 253 runs, including three fifties, at a strike rate of 84.61, and a best of 73. If at all Sri Lanka managed to compete with the bat in the series, it were largely due to the efforts of Chandimal and skipper Mathews.

Jos Buttler: Batting lower down the order, Buttler gave the England batting some much-needed momentum. He played just three innings, in which he blasted 180 runs at a strike rate of 118.42 with two superb fifties. His 93 was instrumental in England escaping with a tie in the opening match while he finished off the series with a blazing 70, to end with an average of 90.

Joe Root: The England number three began the series on a disappointing note, with low scores in the initial matches, but was in his elements towards the end. He scored 171 runs in the series at an average of 57 and a strike rate of 93.95, with two fifties and a best of 93, coming in the final match of the series.