Lahore Lions comfortably defeated defending Champions Mumbai Indians by 6 wickets with 1.2 overs to spare in Match 2 of the Qualifiers of the Champions League T20 2014

Lahore Lions comfortably defeated defending Champions Mumbai Indians by 6 wickets with 1.2 overs to spare in Match 2 of the Qualifiers of the Champions League T20 2014. It was a superb bowling effort from the Lahore Lions which saw Mumbai Indians post a modest total of 135 for 7.

Aizaz Cheema put Mumbai Indians in early trouble taking the first two wickets in consecutive deliveries in the 4th over. The likes of AT Rayudu, Michael Hussey and Captain Kieron Pollard fell in succession after that leaving Mumbai Indians at 94 for 5 in the 16th over. Wicket Keeper Aditya Tare with 37 from 36 balls, Harbhajan Singh with 18 from 10 and Praveen Kumar with 20 not out from 14 balls got some respectability to the total. 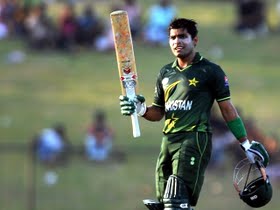 Lahore Lions got off to a busy start of 51 for 1 in 7.5 overs with Ahmed Shehzad scoring 34 from 33 balls and Nasir Jamshed scoring 26 from 24 balls. Mumbai Indians through Pragyan Ojha (4-0-18-2) did come back in the game but the pace bowlers were a big let down in the final overs including Lasith Malinga.

Umar Akmal wrapped up the night with an unbeaten 38 from 18 balls with 4 fours and 2 sixes.

Toss: Lahore Lions led by Mohammad Hafeez have won the toss and asked defending champions Mumbai Indians to bat first in the 2nd match of the Qualifiers at Raipur. Kieron Pollard is leading the Mumbai Indians with Rohit Sharma ruled out of the tournament.