The first T20 between Pakistan and West Indies at Kingstown on Saturday almost turned out to be another instance of Pakistan gifting a cricket match away after having the game in their grasp.

The first T20 between Pakistan and West Indies at Kingstown on Saturday almost turned out to be another instance of Pakistan gifting a cricket match away after having the game in their grasp. At the start of the game, they had West Indies in all sorts of trouble, but allowed them to recover well enough to post a competitive total. Then, while batting, they themselves recovered from a poor start to put themselves in a position of strength before giving away the advantage again. Thankfully, a cool head at the end saw them through.

The game primarily belonged to two debutants from Pakistan, who played stellar roles in guiding their team to victory. Zulfiqaq Babar, at 34, demonstrated that it is never too late to make your international debut. Significantly, he contributed to the win in a big way. He was excellent with the ball – dismissing key West Indies batsmen like Marlon Samuels, Lendl Simmons and Dwayne Bravo whilst also keeping the runs down. But, his most significant impact came towards the end of the match. Pakistan found themselves in trouble, but Babar held his nerve unbelievably well for a tailender, sealing the game with a couple of big hits. 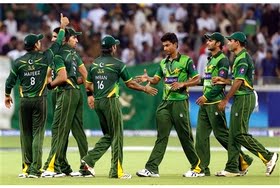 If Babar was brilliant, there was another debutant who also make a striking first impression. Umar Amin played exceedingly well to bring Pakistan back into the contest after they had got off to a bad start. Coming in at number four, and with the experienced batsmen back in the hut, Amin impressively did not show much nerves out in the middle. On the contrary, he found the gaps with ease and kept Pakistan abreast of the run rate. He was particularly impressive against the spinners, going down the track to them and constantly hitting boundaries.

Even as the debutants did well, the victory could not have been attained without the breezy knock played by Shahid Afridi down the order. Pakistan found themselves on the back foot following a second batting collapse, and might well have lost thegame had Afridi not intervened. Afridi’s blitz not only brought Pakistan right back into the match, but also psychologically impacted the West Indian bowlers’ confidence. Having played a high-quality knock though Afridi again disappointed, departing just when the team was the verge of victory. It was enough to set panic in the Pakistan camp again. For a chance though Pakistan kept their cool under pressure.

West Indies, it must be said, were disappointing for most part of the match, and it was only with Pakistan’s help that they managed to stay alive in the game till the end. Johnson Charles and Chris Gayle were poor again at the top while Marlon Samuels and Dwayne Bravo gave it away after getting a start. It was the sterling partnership between Kieron Pollard and Darren Sammy that kept them alive. They were pedestrian with the ball too. Having gotten quick wickets at the top, they allowed the pressure to ease, and couldn’t even get things right against the tailenders.