If ever a team needs its captain to lead from the front, it is during the final of a World Cup. And this is exactly what India’s U-19 skipper Unmukt Chand did on the big Sunday at Tony Ireland Stadium, Townsville, where his team was taking on Australia in the summit clash.

If ever a team needs its captain to lead from the front, it is during the final of a World Cup. And this is exactly what India’s U-19 skipper Unmukt Chand did on the big Sunday at Tony Ireland Stadium, Townsville, where his team was taking on Australia in the summit clash. Chand, played an innings of high quality, which ensured that India lifted their third U-19 World Cup crown, and handed the Aussies their first ever defeat in a final.

The greatness of Chand’s innings cannot alone be gauged by the fact that he remained unbeaten on 111 at the end of India’s successful chase. It wasthe circumstances under which the runs was scored, and the manner in which Chand went about his task that add weight to quality of the innings. As it is, there was immense pressure on the opener, it being the grand final of the event. Further, India were chasing a target, which hasn’t been their strength in the tournament. And to add to the skipper’s woes, they lost a few wickets quickly, chasing a challenging score of 226. In spite of all this, Chand kept a cool head and held the innings together. 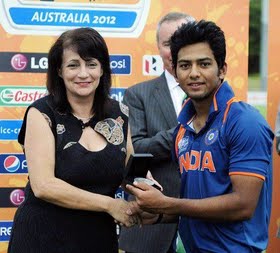 During the course of his great knock, Chand featured in two good partnerships, with the latter one with Smit Patel playing a significant role in taking India home. Although Chand and Baba Aparajith featured in a solid 73-run partnership for the second wicket, all the hard work put in by the duo was undone in a matter of a few overs as the Indians collapsed to 97 for 4, and were staring at defeat. After falling so far behind while chasing a target in the final of World Cup, rarely does a side manage to recover. However, India did, and this was thanks to Chand’s ability to absorb pressure.

Under the circumstances, the Indian captain could have simply decided to go on an all-out attack and try to unsettle the opposition as he knew that the lower-order of the Indian batting was fragile. Instead, he showed great maturity by just hanging around, and not throwing his hand. The runs dried down as the Aussies tightened their grip on the game. Even as Patel was struggling to rotate the strike early on, Chand did not panic, but only encouraged him not to throw his wicket away. And, even as the Indian captain wasn’t hitting boundaries at will, he made sure that the run rate was always within achievable proportions provided they kept wickets in hand.

Chand’s sensibility had a positive impact on Patel as well, and just when it seemed that the task was getting tougher, Chand opened his shoulders. Even here, he did not slog, but hit as many balls straight down the ground as possible. Even as he was approaching his ton, he was not bogged down, but reached the milestone with a big hit itself. Yes, the Indians were lucky that both Chand and Patel were dropped once each. But, Australia have only themselves to blame for letting the cup slip. As for India, the ‘moon’ is shining brightly in Indian cricket, at least for now.