Current Team India coach Ravi Shastri has been given an extended term by the Cricket Advisory Committee led by World Cup winning captain Kapil Dev. Shastri's contract has been extended upto a two-year period, till the 2021 T20 World Cup in India. Shastri was widely piped to retain the post even though India have a lost a few ICC knockout games, including the recent World Cup semi-final with him as coach. Among the other candidates for the post were former India all-rounder Robin Singh, Lalchand Rajput, former New Zealand coach Mike Hesson as well as two-timr World Cup winner from Australia, Tom Moody, who has applied for the position in the past as well. 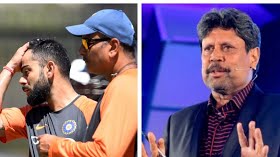 
While Virat Kohli had clearly stated before heading to the West Indies that he would like Shastri to continue as coach, Kapil clarified on Friday that Kohli's views weren't taken when arriving at the decision.


"If we take his views we would have taken the entire team's views too. We haven't asked anyone. There was no scope for that," Kapil was quoted as telling the media after Shastri's reappointment.


Asked to explain what gave Shastri an advantage over others, Kapil said the former all-rounder's communication skills played an important role. "All of them were excellent. Sometime I felt Shastri had more skills of communication, they may have felt differently but we didn't discuss about that, we have given the marks after listening to their presentations.


"We all three have learnt so much, knowing how much hard work they have put in their presentation," Kapil added, praising the other candidates.


Anshuman Gaekwad, one of the CAC members, stated that knowing the players well also gave Shastri an advantage over the other candidates. "Basically, being the current coach, knowing the boys well, knowing the problems well in the team and what needs to be done.


"I think he is well-versed with the entire system. If somebody knows the system, knows the players well and can communicate well, I think he has the advantage," Gaekwad explained.


In addition, India reached the number one ranking in Tests and also won a Test series in Australia for the first time in 71 years.


--By A Cricket Correspondent