Rohit Sharma to media after 212: Now you will write some good things I hope

Rohit Sharma, who slammed his maiden double hundred in Test matches on Day 2 of the third and final Test at Ranchi, took a light-hearted dig at the media

Rohit Sharma, who slammed his maiden double hundred in Test matches on Day 2 of the third and final Test at Ranchi, took a light-hearted dig at the media, stating he hoped they write some good things about him now.

The new Indian opener has amassed 527 runs in the series against South Africa so far, with two hundred and a double century. He was dismissed for 212 on Sunday, at a time when it seemed the Proteas attack was completely at his mercy.

Speaking to the media after another great inning, Sharma said, "Wanted to use the opportunity to full. Otherwise, a lot would have been said and written. You folks write a lot about me. Now you will write some good things I hope.”

He further added, "It was a good opportunity for me to open the batting. As I said during the Vizag Test, the communication between me and my team management was happening for a long time about opening the batting. So mentally, I was ready for it. I knew it could come at any time." 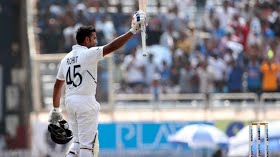 While Sharma had great support from Mayank Agarwal in the first two Tests, at Ranchi, he had a greater challenge as India stumbled, for the first time, to 39 for 3. Sharma then featured in a big partnership of 267 runs for the fourth wicket with fellow Mumbaikar Ajinkya Rahane, who contributed 115.

Sharma yet again reiterated that he was mentally ready to open the innings, and hence has been able to fight away the tight times, especially against Kagiso Rabada, by playing close to the body.

"New ball does something. In Pune and here, it was tough in the morning. Rabada spell was quite challenging. But conditions overseas will be different. Not reading too much right now, waiting for the overseas challenge as an opener," he went on to add.

On Sunday, Sharma became the first opener since Virender Sehwag to score more than 500 runs in a Test series. After India declared at 497 for 9, South Africa found themselves in early trouble at 9 for 2.