The New Year did not bring a change of fortune for Team India, as they plunged to another low, losing the second ODI to Pakistan at Eden Gardens, Kolkata by a massive margin and, with it, the three-match as well.

The New Year did not bring a change of fortune for Team India, as they plunged to another low, losing the second ODI to Pakistan at Eden Gardens, Kolkata by a massive margin and, with it, the three-match as well. If the Test series loss to England was disappointing, this performance by India against their old rivals was equally poor. Going into the match, it was clearly mentioned that the only way India could compete with their opponents is if their batting stands up to the strong Pakistan bowling line-up. 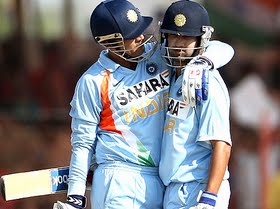 In a pleasant surprise, India’s bowling came to the party as they undid a brilliant start by the Pakistan openers to keep the visitors down to a completely chaseable total. Yet againtheir highly experienced batting came a cropper. Gautam Gambhir was cleaned up comprehensively for the umpteenth time in the last year while Virender Sehwag continued his habit of throwing his wicket away after getting off to a start. Experts are now tired of demanding change at the top of the order for India. In spite of consistent failures, the Indians just refuse to admit that they have a major problem at the top of the order. And unless this attitude changes, there is no hope for India.

One of the reasons why India were getting away with poor starts in a few games in a last year or so was because Virat Kohli was in such magnificent form. However, the law of averages is definitely catching up with the Delhi dynamite now, and India’s woes have since only been broadened. It also hasn’t helped that Yuvraj Singh had been out of the team for the whole of last year and more significantly that, in the interim, Rohit Sharma did nothing apart from wasting his chances game after game.

The ploy to bring back Ravindra Jadeja on the back on some exceptional performances in domestic cricket hasn’t paid dividends either. The left-hander deserved another opportunity at the top level following his twin triple hundreds in domestic games. But, he hasn’t taken a lot of time to prove that he doesn’t have the capability to succeed at the higher level. His batting has been underwhelming for most part and his bowling is, at best, handy, but not consistent enough. If Jadeja continues to struggle in a few more games, India may as well start looking beyond him.

In spite of the debacles over the last two seasons, if India needed further proof of the fact that the team needs an overhaul, the latest loss of Pakistan has given them exactly the same. While they do not have enough resources in the bowling department, there are talented batsmen waiting in the wings to replace the likes of Sehwag and co. Why not give opportunities to Manoj Tiwary, Ajinkya Rahane or, for that matter even Unmukt Chand and Ambati Rayudu. We might not get instant results, but we aren’t going anywhere with the tried and tested legs either. A move towards the youth, no matter how unsatisfying the outcome, would spell progress for India.