I give lot of importance to Test cricket: Jasprit Bumrah on why he isn't surprised with success in longer format

In a short span of time, Jasprit Bumrah has leapfrogged Ishant Sharma, Mohammed Shami and Bhuvneshwar Kumar to become the spearhead

In a short span of time, Jasprit Bumrah has leapfrogged Ishant Sharma, Mohammed Shami and Bhuvneshwar Kumar to become the spearhead of the Test bowling attack. Bumrah began his international career as a limited overs specialist, and not many had expected him to perform so well at the Test level.

12 Tests down the line, Bumrah has 62 wickets at an excellent average of 19. After an impressive five-wicket haul in his debut Test series in South Africa, Bumrah was pivotal in India's historic Test series win in Australia. Recently, he also claimed a hat-trick in West Indies.

While a few critics and analysts have expressed surprise at Bumrah's success, the fast bowler doesn't see it as anything stunning as he says he has always taken Test cricket seriously and in fact playing the five-day game has been a dream come true for him. 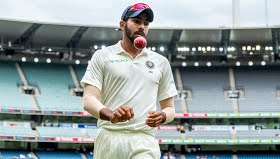 "I give a lot of importance to Test cricket. As a domestic player, someone who has played a lot of Ranji Trophy cricket, I always wanted to make a mark in Test cricket. I always had the belief that if I could do well in first class cricket then I could replicate that in Test matches as well," Bumrah said in Mumbai, at an event where he was named brand ambassador of Seagram's Royal Stag.

"The journey has been good. I have started playing Test cricket now so playing all three formats, which was always my dream. The journey has been good, it has just started and hopefully a long way to go. So believing in myself, taking one step at a time, and be it any situation just backing yourself to the hilt has been my philosophy," he went on to add.

Although he has played 12 Tests over the past year and a half, the match against South Africa at Visakhapatnam, starting on October 2 will be the first time he will be playing a Test at home.

Speaking about it, he added, "I have played all my cricket in India before playing for the country so these are not alien conditions for me. But playing Test matches will be a different experience, I am looking forward to it."

Bumrah, along with Ishant Sharma and Mohammed Shami, has formed a terrific pace trio. Since the start of 2018, the three have claimed a combined tally of over 170 wickets.

"It is very good, all of us are very close to each other, we hang out together. There is a lot of camaraderie as well. Obviously, Ishant and Shami have played a lot more cricket than I have so I try to ask them if they have come here before, in foreign conditions or home conditions and then we find out how things are, then we try to motivate each other if anything is not working or maybe working on how we can improve," admitted the fast bowler about his equation with the senior pacers in the team.