CWC 2015 SA vs IRE match report: Before the ongoing World Cup began, it was clear that Ireland were going to struggle in the bowling department since it was their weak link.

Before the ongoing World Cup began, it was clear that Ireland were going to struggle in the bowling department since it was their weak link. The signs were evident in the matches against West Indies and the UAE. In both the games, their bowling was well below par, and it was their batting that enabled them to win the games. However, the real test of their bowling was to come against South Africa at Canberra on Tuesday. And, in view of what transpired at the Manuka Oval, it must be said the Proteas completely laid bare Ireland’s weak link. 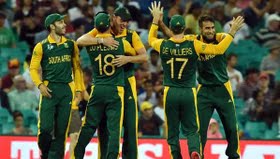 The decision to bat first made it easy for South Africa, but it still must be said that they batted with the intent as if to prove that Ireland’s bowling does not belong to this level. And, their exhibition of batting really made a mockery of the Irish bowling attack. Although South Africa batted magnificently, it must be said that Ireland’s bowling in the match will hurt their pride. The economy rates of their bowlers tell a story in itself – Max Sorensen went at 12.6 an over, Kevin O’Brien at 13.5. Except for George Dockrell, the others conceded between 6 and 7 runs respectively. It was an eminently forgettable effort.

In the earlier games, it was their tenacious batting that had helped the team win games. But, Ireland clearly felt the pressure of a massive total of a burdensome total, and fell apart. They went after the total from the very start, and proved to be no match for the South Africans. Ireland clearly showed the intent to chase down the total. But, their execution went awry. The team’s lack of experience, and the quality of the South African bowling attack stood out as the difference between the two sides. Clearly, there was a wide gulf between Ireland and South Africa. After the wonderful win over West Indies, this was yet another reiteration of how dangerous South Africa can be in their present form. Hashim Amla produced another splendid knock to race to his 20th one-day century in record time. As has been the case with earlier tons, he finished at strike rate of much better than a run-a-ball. This has been the most amazing aspect of Amla’s batting. He has achieved quick runs while playing risk-free cricket. Faf du Plessis also got into the act with another hundred. The continued poor form of Quinton de Kock is the only cause of worry for South Africa in the batting.

South Africa were brilliant in the field, in spite of the fact that they were defending a massive total. Kyle Abbott’s entry in place of Vernon Philander has definitely been a big boost for the Proteas in the bowling attack. His pace and accuracy have visibly troubled opposition batsmen. Dale Steyn and Morne Morkel took the opportunity to get among the wickets as well. It must be said that South Africa came up with a complete performance at Canberra. Ireland, on the other hand, were handicapped by their bowling.