For the fourth game in a row at Canberra, India found themselves in a position to win the match, but failed to get past the finish line. And so, what could easily have been 2-2 after four games, now reads 4-0.

For the fourth game in a row at Canberra, India found themselves in a position to win the match, but failed to get past the finish line. And so, what could easily have been 2-2 after four games, now reads 4-0. The scoreline perceptibly demonstrates that India have failed to win the pressure moments. With Australia, it has been exactly the opposite. If you look at the period of domination for the two teams, there would not be much of a difference. But, it is in the crunch moments that the Aussies have pulled away. India haven't been in great ODI form since the World Cup last year, and the lack of winning feeling is perhaps making them nervous at key phases.

If India look back at the Canberra defeat, India should be gutted with the result. The manner in which they collapsed after excellent tons from Shikhar Dhawan and Virat Kohli made for very poor viewing for Indian cricket fans. India were in an emphatic position from where teams would win 99 out of hundred times. Unfortunately for India, this was that one occasion when a team couldn't get over despite everything being in their favour. But, the Indians only have themselves to blame. They put undue pressure on themselves in spite of being in an extremely strong position to push for a consolation victory.

In hindsight, Ajinkya Rahane's injury proved more costly for India that initially believed to be. With him injured, and unable to bat at number four, captain MS Dhoni had to promote himself. And, the out-of-form batsman's dismissal for a duck proved to be a major turning point in the match, more so since it came at the back of Dhawan's wicket earlier in the same over. With Dhawan and Dhoni gone in quick succession and Rahane battling injury, Australia had seized the initiative back. Even though Kohli was still at the crease, for a change, the pressure got to him as well, as he looped a simple catch. It would be unfair to blame him though for he had done wonderfully well to put India in a commanding position.

With wickets falling in a heap, here was a great opportunity for Gurkeerat Singh and Rishi Dhawan, both playing in only their second games, to turn heroes. But, with the Aussies on the rampage, inexperience got the better of the duo. India can only hope that the talented youngsters learn from this tough initiation. Blaming Ravindra Jadeja for his slow innings may sound slightly unfair. But, his unbeaten knock, during which he didn't find the boundary many times, did not serve much purpose. It was a confused innings, wherein he was unsure of how to approach the situation, and left his late-hitting skills exposed. 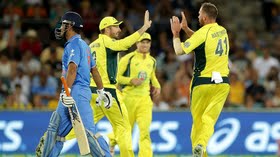 While the batsmen are definitely to blame for the failure, the bowlers too cannot be absolved. Yet again, it were the additional 25-30 runs which India conceded that made a big difference. Had the bowlers restricted Australia to 320, India would have ended up clinching the match. But, Ishant Sharma and Umesh Yadav, two of India's most experienced pacers, one again flattered to deceive. One wonders how long India will carry on with Ishant. Also the time has perhaps come for India to look beyond Yadav in the shorter formats. Put the World Cup aside, and he has struggled in the ODIs. India clearly have massive issues to deal with, even as they reflect on another defeat.