Pakistan are eyeing a victory on Day 4 in the First Test at Abhu Dhabi after South Africa had slipped to 72 for 4 in their second innings. This was after the Proteas had conceded a sizeable first innings lead of 193 runs.

Pakistan are eyeing a victory on Day 4 in the First Test at Abhu Dhabi after South Africa had slipped to 72 for 4 in their second innings. This was after the Proteas had conceded a sizeable first innings lead of 193 runs.

Resuming Day 3 at 262 for 3, Pakistan stretched its first innings total to 442 with Skipper Misbah-ul-Haq helping himself to a 4th Test hundred. Overnight centurion Khurram Manzoor added only 15 runs today to finish with 146. Manzoor was dismissed by Philander with Kallis pocketing a sharp catch in the slips. South Africa’s hopes of restricting the Pakistanis to a smaller lead were dashed by the 82-run stand for the 5th wicket between Misbah and Asad Shafiq (54 from 105 balls with 6 fours). 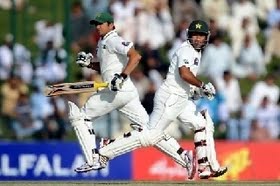 Misbah got out on 100 (from 187 balls with 8 fours), lbw to Dale Steyn. Wicket Keeper Adnan Akmal contributed to the lead with a useful 32. South Africa with their backs against the wall lost their top order by stumps after a promising opening start.

Mohammad Irfan provided the first breakthrough removing Alviro Petersen (17) in the 11th over with a short ball. Skipper Graeme Smith (32 from 61 balls) was stumped out off Saeed Ajmal after getting deceived in the flight. By Stumps, SA lost the big wickets of Jacques Kallis (0) lbw to Junaid Khan and first innings centurion Hashim Amla (10) to debutant left-arm spinner Zulfiqar Babar.

South Africa have got their best batsman AB de Villiers (11*) alongside night watchman Dale Steyn at the crease. The Proteas have 121 more runs to clear to avoid an innings defeat. There is still hope in the South African camp with JP Duminy and Faf du Plessis yet to bat.