Indian player among 10 from CSK to test Covid-19 positive: Repor

In a massive scare for IPL 2020, at least 10 members of the Chennai Super Kings (CSK) franchise have tested positive for Covid-19. The CSK contingent is currently in Dubai.

As per a Hindustan Times report, according to an official in the know, among those who have tested positive include an Indian player as well as a senior ranking official. Till now, there has been no official confirmation about the Covid-19 cases in the CSK camp. 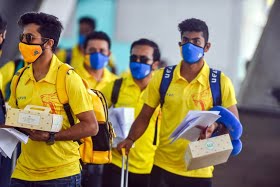 “There was a zoom/video meeting on Thursday night where the issue of Covid positive cases in CSK was announced. The India player who has tested positive has mild symptoms,” the official was quoted as saying in the Hindustan Times report.

Another source was quoted as saying, “A high ranking official is also positive along with a member of the social media team. When CSK asked an extension of their one-week quarantine period with the BCCI on Friday, it raised an alarm that something was amiss.”

The CSK contingent arrived in the UAE on August 21. As such, their one-week quarantine should have finished on Friday. But, now the situation is rather unclear with the developments regarding Coronavirus in the CSK camp.

Prior to the team's departure, CSK took part in a preparatory camp in Chennai. “Though all precaution was taken, the infected India player has come in close proximity with other players back home in the preparatory camp. He, of course, tested negative in India, otherwise he wouldn’t have boarded the flight to Dubai,” the official further explained about the situation.

All the CSK members who have tested positive for Covid-19 will be isolated outside the bio-secure environment for 2 weeks. While the schedule is yet to be announced, CSK are likely to take on champions Mumbai Indians in the opener, being the runners-up in the event.

All the eight IPL franchises have arrived in the UAE. The matches will be played at three different venues -- Dubai, Abu Dhabi and Sharjah. However, the Coronavirus scare is posing a massive challenge for the organisers.