Kolkata will be under extreme pressure when they face Rajasthan in Thursday’s match of the Indian T20 Cricket at Eden Gardens in Kolkata.

Kolkata will be under extreme pressure when they face Rajasthan in Thursday’s match of the Indian T20 Cricket at Eden Gardens in Kolkata. Kolkata have completely lost their way, losing their last five games in a row. Rajasthan are even worse, below Kolkata in the points table with three wins from 10 games. Both teams find themselves in a must-win situation.

A lot of focus will be on Kolkata skipper Karthik, who has been desperately short of runs. With just 117 runs in this season so far, there have even been calls to replace him as captain, but coach Jacques Kallis has dismissed all such suggestions. There has been a mini-controversy of sorts with Andre Russell openly asking to be promoted up the order, which has not quite happened.

The form of Karthik’s deputy Robin Uthappa has also not been all that great. He has scored over 200 runs but his strike rate has been rather poor. Uthappa’s crawl in the match against Bangalore had a crucial role to play in Kolkata loss. Kuldeep Yadav has had a most forgettable Indian T20 Cricket, which has made matters worse. Kolkata now need to win their remaining four games to qualify. 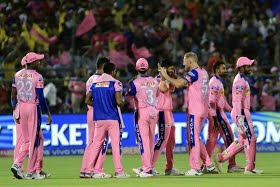 Rajasthan are in a similar position to Kolkata, in that they too need to win all their remaining games to have a chance of qualifying for the playoffs. Although they lost to Delhi , they will be happy with Ajinkya Rahane’s return to form. The fact that new skipper Steve Smith is also among the runs is a definite positive. While Jos Buttler won’t be available, it will also be the last game for Ben Stokes and Jofra Archer is heading back to England.

In the bowling, spinner Shreyas Gopal has been the key. The last time these two teams met Kolkata registered an impressive eight-wicket win. But, things have changed drastically since then. Can Kolkata find back their winning ways or will Rajasthan somehow stay alive? We will know come Thursday night.