Sikandar Raza smashed 82 off only 48 balls as Zimbabwe beat Ireland by 31 runs in a Group B encounter of the T20 World Cup 2022 at the Bellerive Oval in Hobart on Monday, October 17. Zimbabwe were sent into bat by Ireland after they lost the toss. They got off to a poor start, losing four wickets for 79 by the halfway stage. Regis Chakabva (0), Craig Ervine (9), Wesley Madhevere (22) and Sean Williams (12) were all back in the hut.

Raza, however, continued his excellent form. He struck five fours and as many sixes in his innings to lift Zimbabwe to a good total of 174 for 5. The prolific batter starred in a half-century stand with Milton Shumba (16). Luke Jongwe chipped in with an unbeaten 20 off 10 balls, which included three fours. For Ireland, Joshua Little claimed 3 for 24, while Simi Singh (2 for 31) and Mark Adair (2 for 39) also chipped in with crucial contributions.

Ireland were never in the chase when they came out to bat. Paul Stirling was bowled by Richard Ngarava in the first over. They kept losing wickets regularly after that and had slipped to 64 for 5 by the 10th over. Andrew Balbirnie (3), Lorcan Tucker (11), Harry Tector (1) and George Dockrell (24) were all back in the hut. Curtis Campher and Gareth Delany contributed 20s, but it was nowhere near enough. 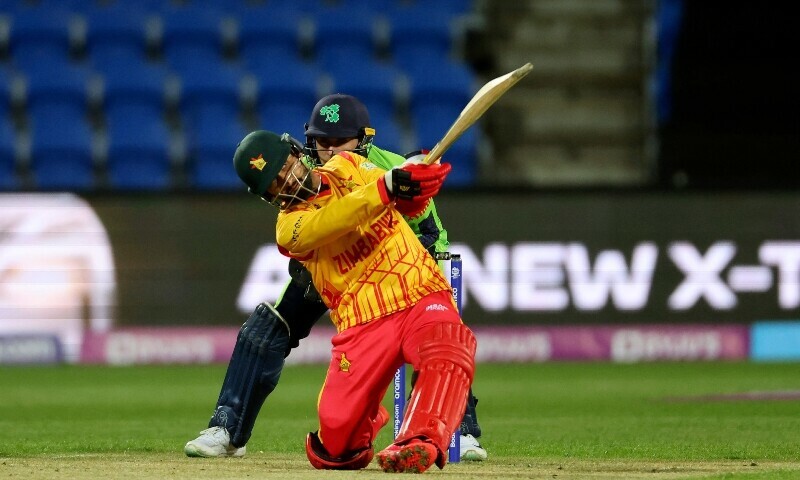 For Zimbabwe, Blessing Muzarabani claimed 3 for 23 in his four overs, while Ngarava and Tendai Chatara picked up two scalps each. In the end, Ireland crawled their way to 143 for 9. Raza was named player of the match for his fantastic knock in Zimbabwe’s win.

Speaking after the win, Zimbabwe captain Ervine said, “We are ecstatic. To put up a performance like that first game, it shows that we do belong here. It's a pity that it has been a long way since we have played a World Cup. (On Raza’s batting) He's been a solid performer for us over the last few months. So excited that he could bring that form here again.”

Ireland captain Andrew Balbirnie did not regret the decision to bowl first. He felt that they just didn’t play well enough. He said, “We were pretty happy at the halfway stage. It was a good wicket, we expected it to be a good wicket all day. When you get blown away (22/4), you are always up against it. Bitterly disappointing with how we started with the competition but it's a pretty straightforward shoot-out for us now.”