Sri Lanka's 1996 World Cup winning captain Arjuna Ranatunga is extremely unhappy at the waymSri Lankan cricket is being run, so much so that he claims that he has stopped watching his own country play altogether.

"Sri Lanka Cricket and the manner in which it is being administered and managed is so disgusting that I don't watch our national cricket anymore," Ranatunga said in a PTI report. 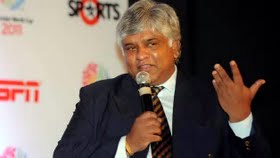 Sri Lanka are playing a Test series at home against India. But, Ranatunga says that he prefers watching the England-South Africa Test series, which England are leading 2-1.

Ranatunga played 93 Tests and scored over 5000 runs. In 269 ODIs, he gathered close to 7500 runs. In the PTI report, he that cricket administrators were more worried about earnings, foreign trips and perks than the team’s performance.

He concluded that he would be writing to the President Maithripala Sirisena and Prime Minister Ranil Wickremesinghe over the state of cricket in the country.