South African all-rounder JP Duminy feels the India-South Africa ODIs will also be closely contested, like the Tests, which the hosts won 2-1.

South African all-rounder JP Duminy feels the India-South Africa ODIs will also be closely contested, like the Tests, which the hosts won 2-1.

“I think it’s going to be more batting-friendly. They are going to be high-scoring games across the country, which will bring the teams together.

“The key fundamentals for me in one-day cricket are partnerships with ball and bat,” he was quoted as saying in an IOL report. 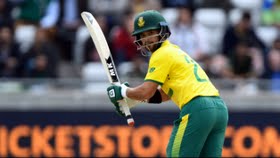 South Africa are the top-ranked side in ODI cricket, but India are also closing in. On the competition, Duminy further stressed, “The team who gets that right will have the best chance of victory. It’s going to be a well-fought series, and close. It’s going to be interesting.”

“They are a phenomenal team. You have seen over the years that they have managed to compete in all conditions around the world.

“You don’t expect anything less from them in South African conditions. They have some new faces, a few young players, but with a lot of talent,” Duminy added praising Indians.