We see something different in him: Rohit Sharma on Ravi Bishnoi

India’s white-ball captain Rohit Sharma termed young leg-spinner Ravi Bishnoi as a special talent and something different after the latter’s impressive T20I debut. Bishnoi claimed 2 for 17, picking up two wickets in one over in the 1st T20I against West Indies in Kolkata. Thanks to his efforts, India restricted the opponents to 157 for 7 and won the match by six wickets to take the 1-0 lead in the three-game series.

Praising Bishnoi for his man of the match-winning effort, Rohit said at the post-match press conference, "Bishnoi is a very talented guy which is why we drafted him into the squad straight away. We see something different in him. He's got a lot of variations and skillset with him. He can bowl at any stage and it gives us a lot of options to rotate the other bowlers.

"Very happy with his first game for India and he's got a bright future and it's just about us now on how we use him. We were very clear with Shreyas and we told him we want that option going into the World Cup. Guys do understand what the team wants and all these guys are professionals and they do understand that team comes first," he added. 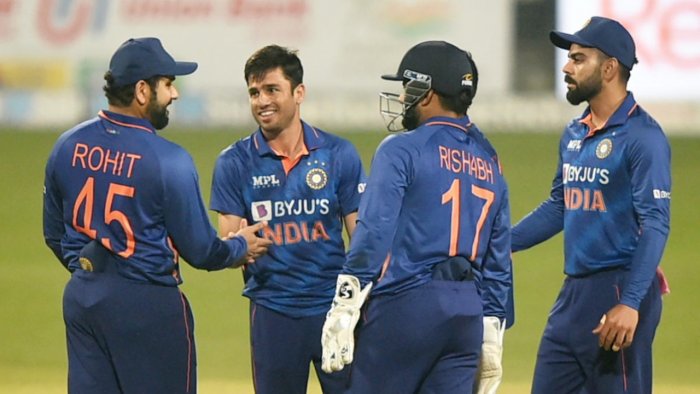 The young leggie first trapped Roston Chase (4) plumb in front of the wickets and then had the dangerous Rovman Powell (2) caught at long-on. After Bishnoi’s exploits, Rohit Sharma (40) and Suryakumar Yadav (34*) starred with the bat as India got home with a little more than an over to spare. However, they lost their way in the middle, stumbling to 114 for 4.

Speaking about the stutter, Rohit agreed , "Should have finished that off a little early, wanted to be clinical. Happy with the win and we can take a lot of confidence from this game. Restricting them to that score was a great effort from the bowlers. With the bat, we were not clinical and it's something we can learn from.”

On Shreyas Iyer missing out despite impressing in the one-dayers, he explained, "Someone like Shreyas Iyer is sitting out, very hard on him not making it to playing eleven but we needed someone to bowl in the middle which is why we couldn't get him in. It's always nice with that kind of competition going around and a lot of the guys are missing out as well. I'm happy to have that kind of challenges rather than not having players available and not in form.”