Overnight not out batsmen Shikhar Dhawan and Virat Kohli hit centuries as India continued their domination on day two. There was a brief blip for the visitors in the middle as Kohli, Dhawan, Ajinkya Rahane, Ravichandran Ashwin and Harbhajan Singh all fell in rather quick succession. But, a crucial half-century from wicket-keeper Wriddhiman Saha enabled India to take a significant lead of 192. Ashwin then struck with the fifth ball of Sri Lanka’s second innings, beating Dimuth Karunaratne’s defence and sending him back for a duck while Amit Mishra’s googly cleaned up Kaushal Silva at the other end, also for zero. 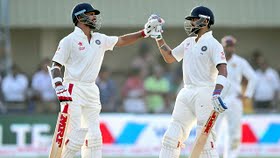 India began the day slowly with Sri Lanka having an extremely defensive field on expected lines. India actually scored the first four of the day nearly an hour into the start of play. Both Dhawan and Kohli displayed a lot of patience, as they moved the ball around. Of course, they were aided by the fact that the bowling wasn’t of great quality. Dhawan went on to complete his hundred off 178 balls, and Kohli too did not bother to go after the bowling very hard. It was only in the second session that they picked up momentum.

Dhawan and Kohli took the overnight score from 128 for 2 to 255 before the Indian skipper was trapped lbw by Tharinda Kaushal for 103. It was yet another instance of Kohli not being able to convert his hundred into a big score. He hit 11 fours in his 191-minute stay, but to be fair to him, replays showed that the ball might have been heading down the leg. In Kaushal’s next over, Rahane was also declared lbw for a duck. It was another debatable decision as the ball pitched outside off and hit him in the middle.

From 255 for 2, India were now 257 for 4, and the five bowler theory was to be put to test. Dhawan hung on for a while in the company of Saha, but on 134, he played on to Nuwan Pradeep. The wickets kept tumbling for India as Ashwin missed an outswinger and was clean bowled. Even as wickets kept falling from one end, Saha kept the scoreboard ticking from the other. He gathered 60 in 120 balls to aid India in taking the lead closer to 200. In his absence, India could have struggled in spite of Kohli-Dhawan tons.

Saha was eventually dismissed off a short ball from Pradeep with the score on 366, but this was another questionable verdict, as replays indicated that the ball may have hit the helmet while making its way to the keeper. Kaushal went on to complete his five-for as he cleaned up Harbhajan and Amit Mishra, and then had last man Varun Aaron caught by Mathews for 4. Pradeep, the other top wicket-taker for the hosts, claimed three wickets, but India were way ahead in the game, and the early second-innings wickets put Lanka in further trouble.