Titans into Semis as Auckland lose out

Titans have been confirmed as the second semi-finalist after Delhi Daredevils from Group A following Auckland Aces’ defeat against Perth Scorchers.

Titans have been confirmed as the second semi-finalist after Delhi Daredevils from Group A following Auckland Aces’ defeat against Perth Scorchers.

Perth Scorchers defeated the Aces by 16 runs to end their CLT20 2012 campaign with a consolation victory. Batting first after winning the toss, Perth Scorchers could come up with only 140 for 7 on the 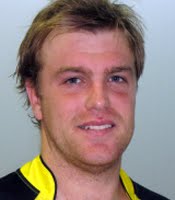 board. Former England Captain Paul Collingwood top scored with a 27-ball 38 (with 5 fours) while Skipper Marcus North opening the batting scored 37 (from 35 balls). Left-arm quick Michael Bates was the pick of the bowlers for Auckland taking 4 for 34 while Kyle Mills conceded only 14 runs in his 4 overs.

In their run chase, Auckland were going along cautiously at 61 for 2 in 9.1 overs when Martin Guptill fell for a 32-ball 36 to Michael Beer. Auckland from that point onwards kept on losing wickets to end up with 124 for 8. Left-arm spinner Michael Beer claimed a brilliant 3 for 13 in 4 overs to get the Man of the Match award.