The West Indies completed an emphatic nine-wicket victory at North Sound to take a 1-0 lead in this two-test series against New Zealand. The tourists were unable to fulfill the promise of their laudable fourth day performance and fell for 272, leaving the hosts the straightforward task of scoring 102 for victory.

The West Indies completed an emphatic nine-wicket victory at North Sound to take a 1-0 lead in this two-test series against New Zealand. The tourists were unable to fulfill the promise of their laudable fourth day performance and fell for 272, leaving the hosts the straightforward task of scoring 102 for victory.

According to coach John Wright, New Zealand started the day hoping to save the game by batting at least until the tea break. The watchful but positive approach their top order employed on the fourth day brought reward. It was therefore surprising that they seemed to forsake their previous assertiveness and retreated into a strokeless shell. 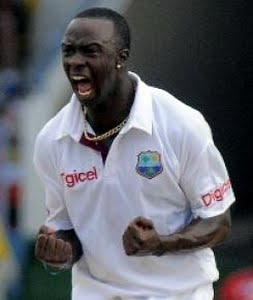 Immediately after the rain delay the Barbadian hit Taylor in front with a back-of-a-length delivery that the New Zealand captain might have expected to bounce a bit higher. The requested review could not strike down the umpire’s verdict.

Then, in his next over, the West Indian spearhead delivered a peach of a delivery to new batsman Kane Williams. Angling in to the right-hander it touched down and deviated off the seam enough to evade his outside edge, but not the off-stump.

Warner in the meantime was doing his utmost to survive the thorough examination being administered by Narine. Bounce and turn, facilitated by the rough outside off-stump, threatened to defeat him almost every ball. Admirably, he held on, and it required the new ball, taken right after lunch, to remove him. It was Roach again who delivered the blow, getting the lefthander to edge a length delivery through to wicketkeeper Ramdin.

Rampaul then removed Brownlie, caught by Gayle at slip, and Vettori, caught by the wicketkeeper a few overs later. Bracewell could only last two deliveries against Narine, and Van Wyk reverse-swept his way to a defiant 30 before he became Roach’s fifth wicket for the innings after missing a slower ball that clattered into his stumps.

The 102 target did not cause the West Indies much concern on a surface that still held no terrors for the batsmen. After pulling Bracewell for four in the fifth over, Gayle needlessly charged down the track to the next delivery and was lucky when his bottom-edge went just past his off-stump. Then, as if to emphasize that such an approach was unnecessary, he displayed his capacity for timing and placement by effortlessly dispatching the following delivery to the point boundary.

The powerful left-hander remained until the end, gathering 64. Powell gave the visitors their only second innings wicket when he slashed a short ball from Bracewell to Brownlie at point.

The teams will now travel to Jamaica for the second test, which starts next Thursday.