Sri Lanka cruised to an 8-wicket crushing win over hosts Australia at the Sydney Cricket Ground. Needing 152 to win from 41 overs, Sri Lanka meant business right from the word go through its openers - Tillakaratne Dilshan and Skipper Mahela Jayawardene. The plan was simple for the Lankans which was to get to the victory as quickly as possible to get the bonus point and they implemented it superbly.

The Lankans smashed the target of 152 in just 24.1 overs losing only two wickets. Former Skipper Tillakaratne Dilshan was on fire taking Brett Lee for a hat-trick of boundaries in an over. The 35-year-old scored 45 from 41 balls with 4 fours and a six before departing in the 12th over when he slashed Clint McKay to first slip. 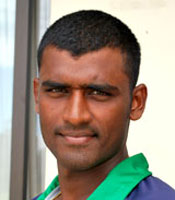 After Dilshan, Kumar Sangakkara joined Mahela Jayawardene and kept the momentum intact. Just when Sri Lanka were in striking distance of reaching the target, Kumar Sangakkara fell trying to loft Brett Lee for a six over long on. Sangakkara scored 30 (from 29 balls with 4 fours and a six) in a breezy stand of 59 runs for the 2nd wicket. In the course of his innings, Sangakkara became the 10th batsman in the history of ODI Cricket to cross 10,000 runs!

The match got over in the 25th over itself with Skipper Mahela Jayawardene helping himself to a sweetly struck 61 not out (from 67 balls with 5 fours). None of the Australian bowlers could make an impression on the Sri Lankan top order.

The Man of the Match award went to Thisara Perera who took 2 for 29 in 7 overs besides playing a role in two run outs.