Shaun Marsh’s unbeaten knock of 68 from 40 balls carried Kings XI Punjab to an upset victory over hosts Mumbai Indians at the Wankhede Stadium. Needing 164 to win, Kings XI Punjab took the chase till the final over in which 9 runs were needed. The left-handed Marsh kept his cool to deliver the sensational victory for the underdogs with three balls to spare. Shaun Marsh got the Man of the Match award. 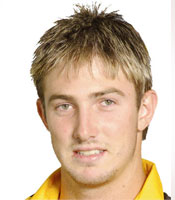 Apart from Shaun Marsh, Nitin Saini with 30 from 25 balls, Mandeep Singh with 24 from 21 balls and Skipper David Hussey with 21 from 19 balls all played their part in the run chase. For the Mumbai Indians, Kieron Pollard’s brillant figures of 2 for 14 in 4 overs went in vain.

Early on, Mumbai Indians batting first after winning the toss were restricted to 163 for 6. James Franklin opening the batting top scored with 79 from 51 balls with 6 fours and 4 sixes. Sachin Tendulkar returned back to action to score a run-a-ball 23 while Dinesh Karthik chipped in with 35 from 20 balls with 5 fours. Parvinder Awana bowled well for the visitors with 2 for 23.