Out Now! The full schedule of the league stage, CSK Vs MI in the opener on March 29

The complete schedule of the league stage of the 13th edition of the Indian Premier League (IPL 2020) is finally out. The T20 league will kick off with old rivals

The complete schedule of the league stage of the 13th edition of the Indian Premier League (IPL 2020) is finally out. The T20 league will kick off with old rivals, defending champions Mumbai Indians and runner-up Chennai Super Kings taking on each other on March 29. As per the schedule, all the eight franchises will play seven home matches. The BCCI is yet to release the official schedule though.

As per reports, there will be no double-headers on Saturdays. The ‘two matches per day’ schedule have been restricted to Sundays. Due to the change, the league stage of the IPL will get extended by a week. It will be played over 50 days as opposed to the earlier 44. The league stage will conclude with a game between Royal Challengers Bangalore and Mumbai Indians at the M Chinnaswamy stadium in Bangalore on May 17.

While Rajasthan Royals have given Guwahati as their choice for second home venue, all the other seven franchises have retained their original venues for home games.

There was a proposal to change the IPL game timings from 8 pm to 7:30 pm. However, the IPL governing council ruled against the same. Among the changes this year will be an All-Stars Game, which will be held three days prior to the main tournament. It has been revealed that the match will be held for a charitable cause. 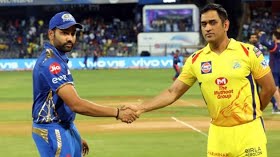 Further, there will also be a dedicated umpire to spot no-balls. The governing council felt the change was necessitated after an on-field umpire failed to spot a clear no-ball from Lasith Malinga during a match between Mumbai Indians and Royal Challengers Bangalore in 2019. RCB skipper Virat Kohli was miffed, and lashed out at the umpire, stating this was not club level cricket.

Interestingly, IPL 2020 will begin less than a fortnight after India's ODI series against South Africa at home ends on March 18 in Kolkata. India are currently in New Zealand for a full tour. Having won the T20Is 5-0, they were undone 0-3 in the ODIs that followed.

The 13th edition of the Indian Premier League assumes greater significance for a number of players as an impressive show can augment their chances of making it to their respective national team for the World T20 to be held in Australia later in the year.

Mumbai Indians beat Chennai Super Kings by one run in a thriller of a final at Hyderabad last year.